So I was in Bratislava again. I can say I have a favourite Slovak band. I can say that, even tho they released only one album yet, but they do play my music. They play something special for me. They are called Eufory, First time I've seen them was on Terchovsky Budzogan, a rock festival in Slovakia. Right then and there I knew I have to know this band closer. There were some language barriers, I have to admit (I don't speak slovak yet - I'm on it), regardless we could understand each other with the members of the band. They are awesome people, open and very talented.

I have to add some more personal thing here - on the festival itself I got 'kidnapped' by a very handsome and sweet guy, I just loved that evening I spent there ;) It DID affect some part of my year after, but not as much as it could've.

Anyways. They attended a slovak talent festival called Rockova Maturita - 32 bands started, and 8 bands reached the finals, which took place in Bratislava - Randal Club - on 28/11/2015. I felt I have to go there, and support them with all my being, to cheer for them, and to give all my energy for them to give the best on the stage and make the jury give them as many points as possible. Therefore I got my tickets, and traveled around 8-9 hours to get there.

I did my research on the bands in the final: Aces, Asenth, Friday Whiskey, Four Faces, Radix, Meredith, The Rockefellas and Eufory. I was listening them all. I had my favourites. I did like Aces, The Rockefellas also, beside Eurofy of course.
I was there from the very beginning, The gates were not even open, and I was waiting to see the guys around, to encourage them. Unfortunately I couldn't catch them before the show. Nevertheless I got some guys from Caliber X (they didn't reach the finals, but the keyboard player, the guitarist and the bass guitarist were nominated in their category for the best players in the show). Milo (in the keyboard category) took the award itself!! From here also I wish him the best in the future, and I can tell it was well deserved award. 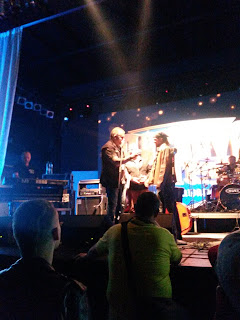 We did watch all the bands together - Share our opinions about them.  For me there were two bands absolutely in favor for winning. I might be biased, I know that right, but seriously Eufory and Aces had what it takes to win.
Aces. I listened to them previously, still in live they were seriously cool. I had no words what the singer could do on the stage, he was living together with the performance. 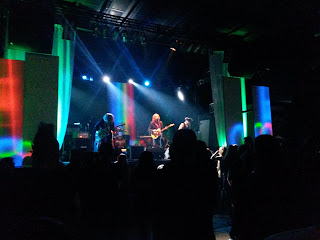 Of course Eufory. To be entirely honest, this was not the best performance I've even seen from them. I've fought myself to the first row through the not that huge crowd, and shouted all the songs they played. Guys, I missed 'Be my brother' so much!!! You really should've played that. From the band Stevo (guitars) and Lubo (lead singer) were nominated for the best players in their category - Lubo won it! He really is awesome. Just listen to some of their songs. I really recommend it. If you like power metal, you'll love them. I guarantee that.
Anyways, back to the contest.
I had a 'wow' feeling when I've seen Four Faces on the stage. Their singer had a serious resemblance to Dirk the guitarist of Victorius (I can tell you will hear about them later on ;) ). I was kind of searching for the guy half of the evening, when Stevo just took my hand and led me to him! Even tho the picture is not showing it in full, but just believe me, on the stage they did look the same: 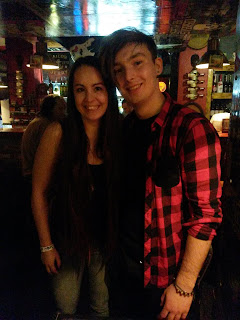 As I've seen, the biggest fan-crowd belonged to Meredith and Asenth. Their music is not exactly my taste, but I have to admit they really did a good job on the stage. Actually as soon as Asenth appeared I was like: hmmmm, I know the singer from somewhere - then I realized, I've seen him in Rust2Dust in Terchova. (The world is so small.) So with a small help of Jan (from Caliber X), I got to the backstage and managed to make a photo with him: 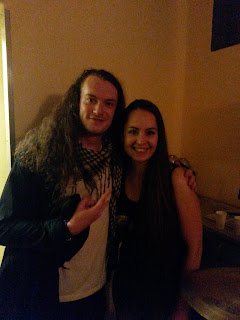 And they have actually won the contest. Nevermind it, even tho I was cheering with all my nerves for Eufory, they ended up at the 5th place. Which is an awesome achievement in whole Slovakia! The bestestest part in it, that they are not even disappointed, they are happy that they could play in the finals, and that they could show what they can do. I'm pretty sure that for the next album they will give everything in.

The night went on and on, and I met several new people. With all honesty I was surprised that they do speak very good english. I did have especially nice conversations with Rana, she is from Iran, and studying in Bratislava, I truly hope we will meet again sometime. It's very exciting what drives an iranian girl to Slovakia. The other girl was Lucka. She is bratislavian. With extraordinary good english. Seemed  she knows everyone around the place. You know, sometimes I'm wondering how it is possible that people become very open to me after like five minutes of talking... Do not misunderstand me, I love it pretty much, I'm just wondering. I love to hear your stories, your thoughts, even your problems. I think it is because I'm an outstander. I'm an outstander, who takes the secrets away, but you can be open knowing that probably I'm not going to meet any of the people you are talking about :P And I have to mention Bibka, the girl, who speaks hungarian, was part of the organizers there. Sweety, I hope you've found that kebab-stand around 6 in the morning :) 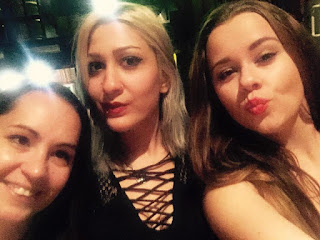 I've also met the girlfriend of Stevo (yes, he is the one I am with the closest relationship with) - had a long talk in Terchova. Man, you look so cool together! Just keep it up and do your best! Here is a pic (still from Terchovsky Budzogan), just for you to know who I am talking about - he should've won that award for the guitar players, he is one of the most talented young guitarists I've met lately, 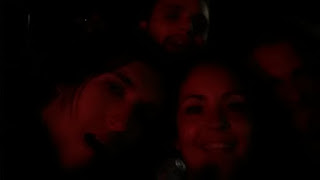 Oh, wait, there is a better one :D 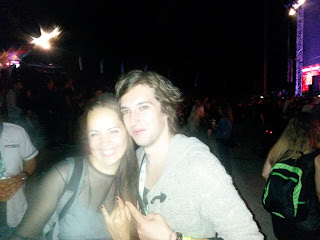 I can't deny though, that the most interesting conversation of the night was with the other guitarist of the band. Pet'o. We were talking a lot about linguistics. Together we are speaking around 8 languages. But only english is common. Talking with him made the time fly so fast, it was truly amazing. He even told me the story how he got in the band: It happened around 1,5-2 years ago, and his dream was to play in Eufory. I can understand his desire to join this band :) And then a day came when they had to part from their former guitarist, Jan. And he suddenly got 2 calls separately from the band, and asked to play guitar. I can imagine the joy he felt at that day, probably he will always remember that.
So many stories and even personal feelings he shared with me, that I'm very thankful to have him as a friend. I know he is not an easygoing guy to start new relationships, friendships, but I'm a persistent girl. If I see the potential in someone (and believe me, everyone has it in a way), I won't let them go! The best feeling of the night was when he thanked me that I started to talk to him, and didn't stop :) Here I have to say that I should be thankful for You to share that many things with me!

And then the evening got over (it was actually around 6 in the morning), and I went home next day spinning around and a continous smile on my face for the next week from the experience I've had, the people I've met and the music I've heard.