What else could be the band to start with than Sonata?

They are on the top of my favourite bands' list. One of the very few bands, who I never stopped listening to, following them from their beginning. (Regarding most of the bands coming up in later posts, I had a huge hiatus in my metal music life between 2002-2007 due to personal stuff, but I can finally say, that I could catch up with almost all the dropped bands, even discovering several old/new formations)
I don't think that I'll dig into band biographies and discographies here, you can find them on their websites - for SA: sonataarctica.info. I am planning however writing about concerts and memories which are stuck to me forever.

I clearly remember my first concert of Sonata. Tho I find it very odd, that I couldn't recall when it was, but after a long day and night of thinking, it had to be in 2001. It was in Budapest, Petőfi Csarnok. I was planning to go there with my very best friend (she still is even tho the distance is huge between us now - only geographical fortunately), who showed me the Ecliptica album, and we both fell in love with the music and the band. We were both students and broken at that time, I was living alone, and had to spare for around 3-4 months for one single ticket, which was 5900 HUF (now it is around 20 EUR), which was really really huge amount of money back then! Unfortunately I had to go alone, because she got sick, and I really didn't want to miss that concert. For me it was the concert of the century (at least I felt like that back then - and after that many concerts of the century followed it). We were going to rock and metal clubs and pubs a lot at that time, so the crowd and the people were not weird for me, but that I was alone there - that was absolutely outstanding. Imagine a young girl with mile length hair in full black and boots getting a beer at the bar and smiling like an idiot... yes, that was me. And then they started - Fullmoon, Replica, and all the other songs I knew by heart. Amazing introduction to live metal music. I didn't dare to go into the first line, not even close, because I was a bit afraid of the headbangers and the drunk/half-drunk metalheads... so I was just watching them from like 15 meters without blinking for the whole concert.
Nowadays on concerts and festivals I can see 14-15 years old kids following their parents' steps, or even being alone only with friends of the same age. But then again... it was 15 years ago, and the world had changed.

Since that time I've been on many many Sonata-concerts. In the past two years I started to increase the number of these events, which gives me huge pleasure. They have a European Tour every year, different supporter bands, and I'm just connecting a nice trip or sightseeing with a Sonata-concert. I believe in what I was reading some years ago: In every year you should travel somewhere you've never been. For me it is always in a city, country, where Sonata is playing.
Furthermore you can meet so nice people on these concerts. The saying is so true that the minds alike will meet! It's true beyond truth with music in my opinion. Especially in the digital age, when you can keep contact with people from all around the world on Facebook or Whatsapp or any other application.

Last year, in 2014 I managed to go 4 concerts of Sonata's 15th years anniversary tour, starting with 29th of January, first show on the tour in their home country, Helsinki, Circus. That show was remarkable in many aspect. January, Finland. It WAS really cold... while sightseeing, I was wearing almost all the clothes I had with me, 4-5 layers, felt like a michelin-doll, but c'mon, for the concert you just can't wear that many stuff. So I went to the Circus around 1 hour before they opened the gates. Well, yes, I wanted the first line, I got accustomed to mash pits and headbanging in the past 15 years. I got totally frozen, and unfortunately I was not even in the first 50 people going in. So first row was off, but got the second, and believe me, I'm able to make space for myself to headbang (my hair is still/again VERY long, so I just start and people back off). The very first surprise was when I heard hungarian talking. I was puzzled. Is there anyone else from that far coming only for Sonata? I need to know them. And yes, I met Saci and her parents there. The funniest part of it was that she was born when Sonata was born. Age doesn't matter. We could talk about the band, we could've talked longer, if they didn't start, but they did. And there comes the second surprise. The biggest one of all. I've heard the first notes of 'In the Dark'. Now, that is my favourite song. I screamed that loud, that I felt all the eyes around me worried if I'm ok. I was. I was very ok. I was more than very ok. It was the first time they've played that song live. (Days of Grays album 2009 - 5 years and they played exactly when I was there - what is it if not a sign?). After the concert I was hovering 5 meters above ground. I barely could sleep that night... I was crying there and crying myself to sleep. Not because I was sad, I was that happy.
The next day I went to Tampere to the next show. It was a small disappointment as it was in a conference-hall of sorts. People were sitting. Like on a chair. While there was metal music on the stage. I didn't know what to do with myself. Still the band gave everything in, so I enjoyed it a lot!!
Same year 2 more concerts in Wien and Prague in May. Both were a blast!
On this tour they had Trick or Treat as a supporter band, they gave an awesome show also - will get there later in an other post about them.

This year... oh, this year was excellent in regards of concerts and festivals. I've seen Sonata 4 (3) times, they had to cancel Warsaw concert due to Tony's illness.
1st of May, London, O2 Islington. Twilight Force and Freedom Call supporter bands. I love London. I wanted to go there for so long time, and connecting it with Sonata, oh so very yes. I fell in love with London at sight. I used the citybikes all the time, and I went to O2 with a bike too. I already knew that the show will be more than awesome. I'm always checking out the supporter bands. Twilight Force was new to me, listened their album before, liked it. But then. Freedom Call. They were one of the bands I decided to stop listening around 2003, but by that time they already crawled into my heart, couldn't wait to hear them live. So I arrived in time, heard everything, got exactly what I expected, and even more. The sound was amazing! Then at the end of the show Tony made the speech. The speech which burned in my mind. His humility and greatness... overwhelming emotions broke out. And what he said should be heard. Should be known. Should be done. He was thanking for the audience to come and to buy a ticket for live concerts. Let it be any genre of music, let it be in the past or in the future. I AM KEEPING LIVE MUSIC ALIVE! 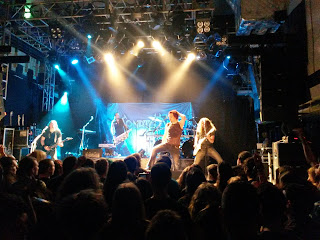 I attended 2 more shows of this tour, the remastered release of Ecliptica. One of their best album. But I am afraid of saying which is the best, even which is my favourite. I have favourite songs. A lot of them. Some albums have all the songs on my favourite list. Krakow and Warsaw were awesome. I'm living in Poland, so they were not that far for me, but the first concerts in the country, it couldn't have been better. 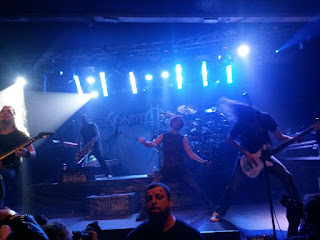 Warsaw. Well. There was no Sonata in Warsaw. Tony got sick 2 days before in Budapest, where Christian from Twilight Force helped him out in the Kingdom for a Heart, Krakow, where he was singing half of the songs. I was checking my phone for news whole day. I was planning to go to Progresja very early to have a good place to watch and listen to all 3 bands from the first line. I clearly remember, that 1,5 hours before the show they announced, that they have to cancel the show, and Freedom Call will play headliner set. I had the most mixed feeling ever. I cried on the street in the rain walking to the club and smiling because of Freedom Call. I was the first in the club. I've seen people broken because they've travelled from far end of Poland just for Sonata. There was a couple also, to whom I had to tell the worst news in their life. (Alicja, I'm still planning a trip to Torun.) But afterall we had a great time together there. The biggest shame was that people were going home. They didn't even give a chance to listen the other two bands, who were supercool.
My last Sonata-concert this year was in Slovakia, Banska Bystrica - More//Than//Fest. I have to tell, that it was below my lowest expectations. The venue itself was awesome. It was in an old amphitheater, which could've given the background for the awesome sound, but it failed. Failed bigtime. The stage was at least 10 meters from the audience, which didn't help either. Still, it's a Sonata-concert, cannot be bad. It was not, I was in the first line, which really didn't seem that close as in other shows, still far far away. 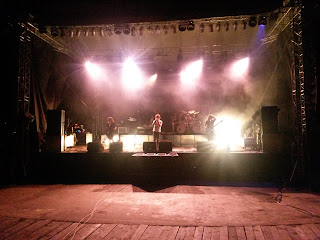 As for the future, they are going to a US tour with Nightwish until early April. (How I wish to be there, you can't imagine.) I'm hoping them to pop up on some summer festivals at least in Europe, and/or to fulfill my wildest dreams, to have a European tour again (maybe autumn?).