Here comes the big shot of the weekend. After an amazing Dragony-Wisdom concert on Friday, deadly tired I took a nightbus to Berlin. Capital city of Germany, yey. Managed to get lost fast at Hauptbahnhof, but afterall got everything to be ready for the night!
Don't even know where to start, so many things happened :)

You might know how close Freedom Call is to my heart... so close that only this year I managed to see them live seven times. It was scary even to count it OMG :) I loved them more than 10 years back, but as I've mentioned before, I stopped listening to them around 2001/2002. Now I should be very thankful for Sonata for bringing back them to me (one of the many things I can be thankful for). 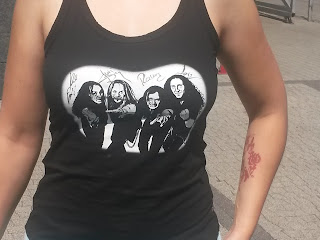 These guys are simply amazing. What Chris can do on the stage, the fun he makes and his pure originality is always taking me off my feet (he always loves the local water!). His continous happiness became the trademark of the band - Happy Metal! It really is. At the very first second they come out to the stage I have the 32teeth smile on my face.
Managed to have some words with him after the show in K17 on Sunday. For him being on the stage is always a blast. The energy the audience can give is amazing. I could tell (and he actually listened to it) my feelings about the energy flow. I believe it goes both ways. Not sure which was first, the egg or the chicken, but they live off our energy, and we do live off theirs. It's an awesome symbiosis between us. I can't live without live music, and the bands can't live without audience ;)
Ramy at drums. He is one of his kind. Extremely talented drummer, and very smart man. I got the chance to talk with him once, and I can tell he has that clever eyes if you look closer. 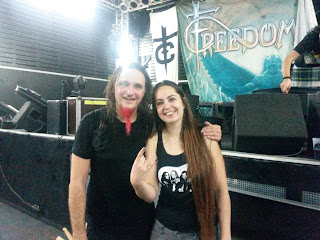 Ilker at the bass guitar. He is kind and has a simply amazing personality. In Zgierz (PL) and Ostrava (CZ) we could talk a bit even scratching the surface of the private lives.
Lars at the guitar. I've honestly never met more open person in my whole life. He is the one first coming out to the fans after a show, has a nice word to everybody. Enjoying the love of the fans and I do believe they enjoy his presence also pretty much! 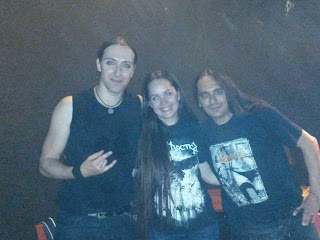 Now get back to the present. The show started with Vexillum. They are an italian band, I've found them through a Spotify radio some time ago, and I fell in love with their music. Couldn't wait to see them live. For me a band is great if the live performance gives the chills. And this show was THAT kind. I think that for a smaller band playing abroad having fans abroad can be an amazing feeling. Crazy girls (like me - with terrible voice) shouting the songs with them gives the purpose for playing live and travelling around, showing themselves to the world. They played some of my fav songs like The Wanderer's Notes, but THE very fav was missing: The Dream. 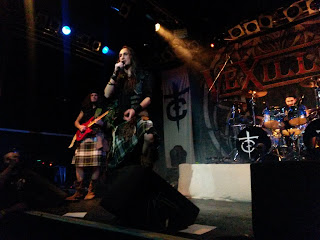 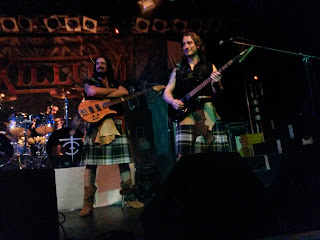 I am very happy that they will come to Poland next year to Zgierz, City of Power festival. And they did promise to me, that they will play this song there!! We will see if... When I told this to Dario (vocal), he started to sing it for me. There at the bar. I was melting, almost started to cry :D It was amazing!
I got a group photo with them!! It was around the 5th try of the guy who I managed to find... Here we were just keeping that smile for a minute or so. Still this pic means a lot to me. 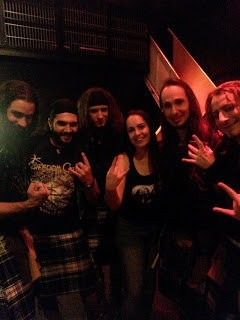 There was a guy with the band, who recorded the whole show with a small camera. Somewhere in the middle he noticed that I just love the band, and told me 'don't be scared' - and lifted me up on his shoulders, and gave me the camera! So whenever you see the concert video about it with closeups on the guys, that was me holding the camera :D

In the middle of the concert - when I was headbanging bigtime, I just looked right for a second, and saw Florian (guitars in Victorius and other bands) waving towards me smiling! I just had to jump on him with excitement that he recognized me :) We've met on More//Than//Fest festival (SK), and there and here also after the show had very fine conversations. No wonder, that Lars has amazing friends, like him! Such a wonderful person. Flo, we have to continue that conversation which we started outside! :) Also met Lars' sister, Cori, who came for the show. It was funny how we could actually talk to each other. She was speaking german, and I spoke english. And we understood each other perfectly well. There is no language barrier if you don't want it to be there ;)

And after Vexillum, FC came. The concert was extraordinary. They've just blown away everyone! I was that close, I could've touched the guys. I was wearing my awesome original FC shirt - which they've signed earlier, and they seemed to recognize me, winking from the stage, which always brings the butterfly effect in the stomach :D As usual, this show took my voice away! Jumping and shouting and clapping and hey'ing with the whole crowd whatever they were playing. They played one of my very favourites: Bleeding Heart. 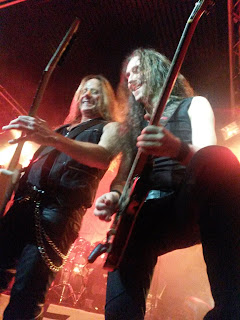 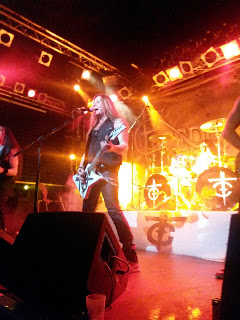 After the show I could just talk briefly with them (I didn't even see Ilker), but still it was an awesome night. I met again new people out there, and I'm pretty sure that it was not the last time we met on a FC show. Callers are everywhere!
Thank you Amelie and Christians for the great night! 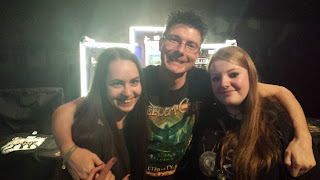 And I already collected some goodies! I can't have the drumstick in my wallet, but I'm keeping the pick there to bring luck :) Thank you Ramy and Francesco!!! 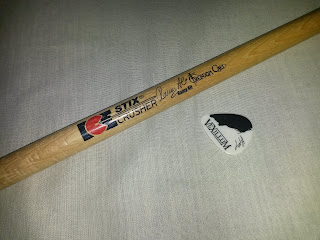 And the conclusion of the night: if you have a toothbrush, you can open a bottle of wine!

Posted by Concertjunkie at Thursday, December 10, 2015
Email ThisBlogThis!Share to TwitterShare to FacebookShare to Pinterest