As I promised earlier, here comes my last weekend. Actually for now it is only vol.1, because I've been in 2 cities, seen 6 bands, and so many things have happened, that I've decided to split it in two.
Started my journey from Wrocław Thursday evening to reach Vienna by Friday morning. With changing buses it was only around 10 hours of trip, but at least I could sleep a bit on the bus. Vienna is a beautiful city. It truly is, but not gonna go through the boring sightseeing stories. Let's just say, that I didn't really go there to visit the city. I went there to attend a gorgeous night in ((szene)).
I did have guarantee for that - knowing what Wisdom can do on the stage, and had very high expectations for Dragony. And this show was their second album's release party as headliners.

Dragony. I've written the story already how I met Sigi, their singer in Terchova. That awkward conversation... I will never forget: "Are you a musician also?". I'm so sorry. But anyway, I've got to know him a tiny little bit, and got to know the music they play. After that festival I could only listen to their first album from 2012: Legends. And here is my favourite song of the album: Burning skies. When they've released the new album: Shadowplay in September, I knew I will listen to it 24/7 for a week at least. Especially after the first single: Wolves Of the North. I love Game of Thrones back and forth, and the song has its theme, and never gets boring for me.
Had plans to get to a GammaRay tour, which was supported by them, but lack of holidays... oh well, was more interested in their headliner set anyway. As soon as they've announced it, I started to plan my trip to Vienna. That only added to the bucket, that Wisdom was going to support them.

So there I was. And I was so there, very early, almost the first in the club. I did my merch-visit (got my very own Dragony-shirt!!) I just needed the first row. I had to feel the bass and everything close. Also was interested in the 2 other supporter bands - Nightmarcher and ToBeContinued. Both are from Austria. (Unfortunately I did not have time to do my usual researches, so they were surprise for me).

And then they've started. Nightmarcher. That girl has an incredible voice. I had goosebumps quite often when she was singing. She just joined the band not so long ago, so was not easy to find anything where she is singing, but finally I've found a live video of the Wanderer song. Listen, listen! I still feel the song, and what they've done on the stage. If I can, I surely will go to an other concert. Let's hope they will be on some summer festivals. Fingers crossed.
Unfortunately I can't say that much good about ToBeContinued. Who knows me knows, that I'm a very honest person. On my mind on my mouth. Here it goes. The music, they are playing is good. But what they did on the stage could be in a studio. Seriously guys, why place 2 vocal girls in front of the bassist? Why? Here again the lead singer girl had a very very good voice. As I've noticed, most of the songs was a conversation between a woman and a man. The man in this case was the keyboard player. He was living with the music, not necessary with the audience. I can say the same about the girl also. They actually communicated with each other on the stage, closed out the fans. They had quite a few I have to admit.

It is possible though, that I was so excited already then waiting for Wisdom to start, that I was not patient enough to listen them with my heart. But but but... Wisdom. Before the show I've seen them going to the backstage, had a short eye-contact with Tomi (drums), who seemed to recognize me right away :D I've met them first in Zgierz (PL) on a festival this summer with the recent lineup. So with the other hardcore Wisdom-fans from Austria - we took the first row, and they've started. The sound was amazingly good (but that is expected from Szene - on Sonata concert it was awesome also). They did play a new song also, for what I was soooooo happy, I even have a video :) 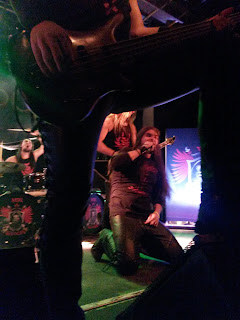 Their new album will be released in February 2016. It's in my calendar already! If you want to listen some goodies - here are my favourites: Wander the world and Judas. Will not paste all my favs here, that would be like 4 album worth of songs :)
After the whole show finally I could make some nice pictures with the guys. Even tho I had to hunt them down to have a whole band in one pic, I almost managed to do it, NG is missing from the pic. *sadface* 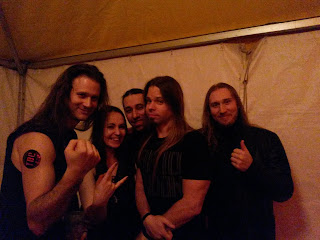 Also have some individual photos... With Máté. Oh well. I noticed his expression after the photo, and was VERY thankful for that. But c'mon, he had tokaji wine, which he gladly shared. I took as a compensation for the face. :D 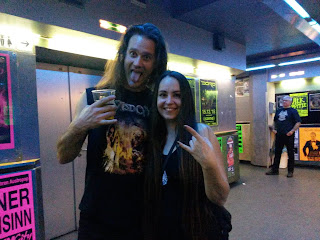 Managed to make one with Anton too, he is an amazing guy. Truly talented - they've played songs he was writing... I have a feeling that he is that kind of talent, who is always drawing back listening, but does not talk too much. At least I had that experience. That silent kind. 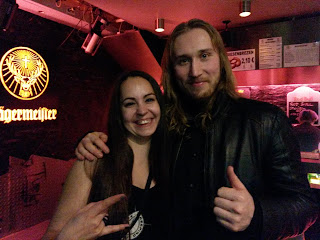 After the Wisdom-orgasm, there started Dragony. The first thing I can say, that they know how to put on a show. Songs just came one after the other, and the time flied so fast... it was already over. I was like: can you just start over again? But I couldn't push the restart button. There was fun, there was sad, there was energy, there was fast, there was slow on the stage. They did everything what the fans needed. For the next show I need a Unicorn. #gloriusvictorius
Finally the end has come, and it was the time for me to wait for them outside, talk with them if I could. Sigi is a great guy. Period. I mentioned in an earlier post, that a friend of mine and her husband might come to this show from Slovakia, but unfortunately they couldn't. She asked me to give her greetings to Sigi. As I did, he remembered them right away! After the show I knew he would be glad to assist for the photo I was waiting for since Terchova :D 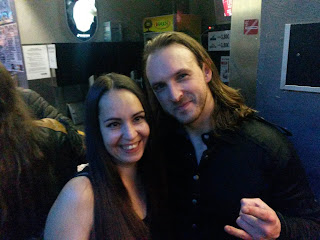 I don't think so that there was anyone else in the crowd who has the following photo. I literally collected the guys together from the room grabbing their hands. I have to apologize to those people from whom I took them away, but it was only some minutes :) (Even tho Frederic, the drummer is missing, I'm still proud of myself, that I could manage this pic) 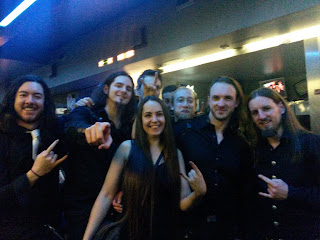 And fortunately the night was not over yet here!! With the guys from Wisdom I could talk in the club for around an hour more, it was amazing. And no, the night is still not over. As basically the only hungarian there, Tomi asked me if I would like to join the afterparty. So 3 of us (Anton, Gábor K and Tomi) and 2 more girls (who actually went home early) went to drink some more and talk. I have to add, that it was a waste of that wine to mix it with cola, which we figured with Tomi was not even cola, but some cinnamon flavoured ice tea. Argh.

At the end I got back to my hostel around 6 in the morning to prepare myself for Sunday night - Vexillum and Freedom Call in Berlin. But that is an other day's story!