The next couple of posts will be about Rockharz festival in Ballenstedt. It was not really a planned festival for me, but I made up my mind fast after seeing the lineup - especially the last day, but every day seemed very good. 4 days and Germany, here I come again. I had everything planned, all the tickets for the transport when I saw the announcement, that the festival is sold out. I started to panic, and created plan A B C D... First I was writing to the organizers, I wrote a really really 'pretty-please-with-whipped-cream-and-cherry-on-top' e-mail, for what I got an answer fast, that they won't let me down, and I can buy my ticket at the entrance. I was very happy and thankful for that. So I packed my tent and sleeping bag and took my 13ish hours of trip to Ballenstedt. Fortunately I was about to have the camping site with the Knights of Twilight's Might, and we kept contact on phone, so I found a pretty nice camping place beside Sue and Sam. They are super nice girls, and I consider myself very lucky that I met them (I can say the same in general about all the Knights)! Unfortunately my phone died shortly after the festival, so some of my memories are kinda blurry, might be some events placed on a wrong day, please forgive me because of that.

Before the festival I was talking with Dave also about when and how they will come with Ike (you remember, the awesome US guys living in Prague - and I met them in Metalfest Openair in Plzen). That was a sweet conversation also, as he mentioned that they will bring beers. I didn't think about that earlier, but it turned out an awesome idea. I just had some difficult time to pack all the beers and pálinka beside all my stuff. I also packed a very precious poster, which I will mention later on... So when I arrived and put up the tent, the girls offered their cooling box for my beers. Kudos! We started with a beer and talking just to know each other a bit more as we were about to spend the next 4 days beside each other. Turned out fast, that we don't have only the music taste similar, but they also huge HP-fans. Lovely, I thought. I started to believe that it truly will be a fantastic festival.

I was ready with everything and after the beer I was ready to explore the venue a bit. It was amazing. The german precision was totally visible. I'm not sure if all the german festivals are the same, but here the tents and cars were placed in a perfect order, squares for them, and pretty aisles - let's just call them roads - were beautifully left clean between them. I was truly surprised. Well... this was my first festival in Germany where I had my tent with me, so it is possible that all of them are like this, but I was amazed for sure. The concert area opened around 1pm, but outside of that there were possibilities also. Individual showers, a power-bus (for charging electrical devices), food and beer stands and a supermarket! As I was looking around, I saw a small hill closeby. This small hill was important, and had some great moments during the festival for me.

On the first day I was interested in 2 bands only, but obviously wanted to see as many as I could, just to figure out if I like them or not. You know, I will never share my opinion until I don't experience something. This goes for books, music, theatre, you name it. But I can tell in general that this festival was more about the bands I liked even before and about friends than exploring new music. Obviously I did that too, but the emphasis was on the former.

When the concert area opened, I already went in, and noticed that the 2 stages are right beside each other. The running order let me guessing it, but I find it a brilliant idea. While there is a show on one stage, the next band can do the soundcheck on the other. Got myself a beer, and headed to the first line - as it was Thursday, there were not that many people. And the first day was a 'Label night' of AFM. And I started to talk with some guys there already, some of them came to the festival only for the first Band. So it was Mors Principium Est. Erm... They were good enough, but I was so freaking excited already to see Kissin' Dynamite first live, that I couldn't really concentrate the music, so I don't remember much either. The only thing I remember is that one of the photo-guys brought a full box of jelly and shared with the first line. I was surprised but it was fun! 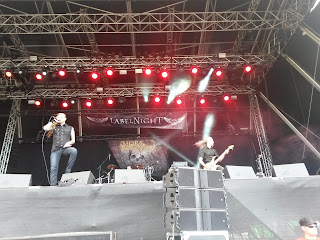 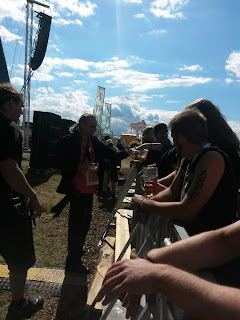 Then I had to go to eat something during the next band to be fully functional for KD. Fast I've found the food I was eating on the whole festival later on: roasted chicken. Half, or just the legs, or a whole chicken, but that I didn't do, no no. Reasonable price and filling also. So I had my chicken and was going back to the fence. Here I would like to mention that even tho I find the two stages beside each other a brilliant idea, they were a bit too high for me - was around 2-2,5m or so. You will see on some of the pictures that if I was in the first line, I had to look up and up and up to see something. It was almost impossible to see anything of the drums from the front rows. 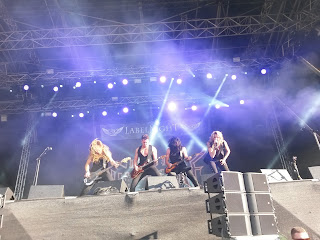 Anyway, Kissin' Dynamite. Gosh they have energy. They are one of those bands who has HUGE online presence, which the recent generation appreciates a lot. Their new album has a lot of thoughts about the present in many layers, sometimes making fun of it or criticizing, or doing that both at the same time. Unfortunately there were only 2 song from the new album Generation Goodbye. I thought I might start a tradition for myself going to KD shows, and doing a selfie when they play Hashtag your life. Actually as you know me I barely make any selfies. It's gonna be fun anyway, as I'm planning some shows for their autumn tour. Anyway, I was shouting and screaming also a lot, and jumping too. The king-garment was nicely done, as it fits to a king, allright. It was a great show with a lot of power and great sound - even from the first rows. For me it was the true start of the festival, and got the energy to be able to walk and move forward (After half a night spent on the bus half sleeping). Here I link you one of my favourites from the new album, listen: She came, she saw 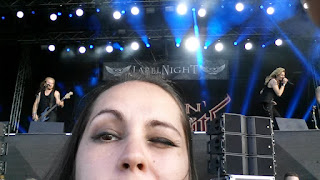 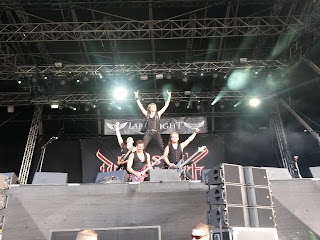 I needed a drink and go out a bit to breathe, maybe sit down a bit, so I did. The next band I got to know not so long ago, Monique from the FC Family told me about them. J.B.O. By the time they were on the stage, people started to arrive. A LOT actually, and as J.B.O is a band singing in german and actually making fun of everything on the stage, people love them. Additionally they were not formed yesterday. I did enjoy the show, had no awake brain even to try to understand what they were singing about, but it was fantastic feeling being in the middle of a crowd singing as from one mouth. Oh, and they are very pink. Like pink pink pink.

After that actually the last band before collapsing was Onslaught I saw. I can say barely, as the trip just kicked in, and I couldn't even stand anymore. Was about heading back to my tent when I bumped into two guys from the early afternoon, and was just talking with them a bit. And at the end I was listening to Asenblut from my tent and fell asleep 24 hours after I left home the day before. 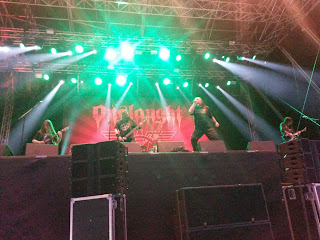 Here you go a playlist from the AMF Label Night of Rockharz - Day 1 (thx to Spotify and setlist.fm - mostly no setlists on the site, so picked something closer in time, which the bands played with very high possibility :D)