Here comes the second day of the fantastic Metalfest Openair! Saturday started slowly. From the previous day's weather and the mud I got my sneakers a bit dirty, but oh well... was hoping for a great day again. My tent was not that far from the venue area - around 5 mins on foot, and the shower, coffee and breakfast were in one place anyway. 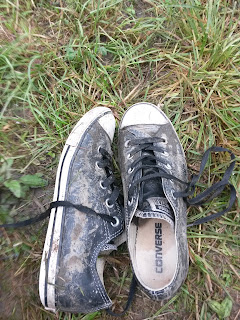 So morning routine done, I was heading fast to the stage to see Scream Maker, a polish band, who won a Talent show of sorts in Poland, and jumped in the last minute. It was a great starting of the day. The music was powerful, and I appreciated a lot that they are singing in English, definitely a must-checkout-later band. I'll see them again this summer in Zgierz - City of Power, so I thought I'll have time dig a bit deeper into their work. Can you see the fire? is actually a very catchy song from them, I like it a lot. 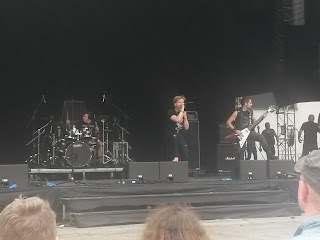 And then there was something awesome coming up. I've never heard of the band Dark Gamballe before, the only thing I knew that they are czech. Had some ideas what kind of music they could play - guessing from the name. BUT. It was a fantastic surprise when they simply appeared on the stage, nothing but stylish clothing. And when they started to play... omg. It was something great for my ears. The only bad thing I can say of it is that they were singing in czech. Unfortunately I did not understand a word, still I got mesmerized. Listen to some of their songs, I loved it live. This was the one caught me totally off guard, and even started to sing with them: Fata kapitána Morgana - although I still have no idea what it is about, but nananananananananana. 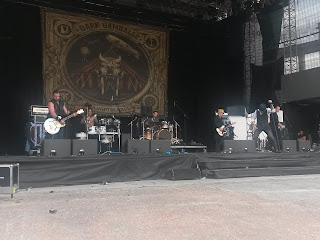 Meanwhile the show I started to place myself towards the first line to be able to see the later shows from close.
Fortunately I had the guys from yesterday to have the beer supply brought there directly, so I didn't need to leave my place. Furthermore I met Veronica there, and we started to talk right away. She is from Mexico, but studying in the Czech Republic. Cool, isn't it? We literally was talking through the whole day from that moment.

Anyway, we were waiting for the next band, Jared James Nichols. They are from the U.S, and was on tour with Zakk Wylde. Probably you've heard more about him than the band on stage, but they do very similar music. They play only two guitars and drums. But those guitars, omg. Even I've heard how awesome it was :) Jared is a true guitar virtuoso (if the word exists in english...) He had a lot of solos, and poured his heart in them all. For Can You Feel It? they made us all sing with them. It's a great song! After the show I managed to catch them beside the stage, and could take one of the best pictures on the festival. Yes, they are tall and beautiful! :') 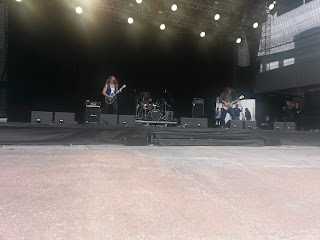 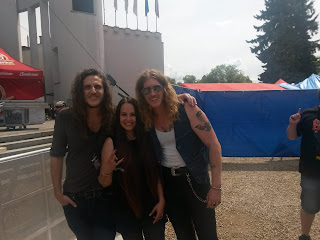 And then we started to hear around that Sirenia will not play. I was not that sad, especially because of the show instead of them. Reno Vega came from Germany to make a great performance and fun show on the stage. They call themselves "The biggest little Band in the World" which is quite accurate. They were really fantastic. They really seemed to enjoy the whole time they had in Plzen. The bassist came to the audience and shared some paper-fireworks, and the guys who got them should set them off at a certain time. Obviously it didn't work out properly, but we all had a laugh at that one. He also came close to us and tried to hi5 as many people there as possible with a huge pink cheer-hand (blowable ones). In general they played the german power metal I love so much, so I was sure I'll listen to them later on if I could. Maybe they played this song: Lies, blood and Sweat. Go, listen and chill out! Oh on a sidenote for the band: Please go Spotify! :) 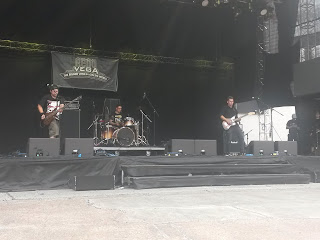 After them I just knew I won't like what comes. Crematory. I've seen loads of people around in their band-shirt, and drew a conclusion that I might have some problems in the first row. They are also a german band, they play gothic metal. It was not that bad I thought it would be. Obviously I still don't really like growling, but in general I did enjoy the show. With some drinking on the stage - probably some whisky from a gas-can. Anyway, there was moshing, there was shouting, it was not a bad show. 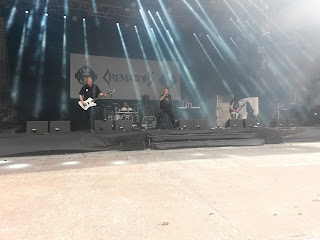 Then almost there what I was waiting for whole day. Before them however Delain on the stage. I have one expression describing their presence: Seriously Synchronized Headbanging. It was one of the most professional shows I've seen that day. Always someone in the front to be visible for the audience, very good sound and vocals. I also promised a friend to make some pictures of Charlotte. I did my part all right. Besides all this, the show made me want to go to an other of theirs (which is going to happen in October - they will play on Keep Wiseman Alive with Wisdom). Even though they are not my favourite band, I still listen to them, and waiting for the new album (Moonbathers - out already by the time of writing the post). I can't really say that I do love female fronted bands, but I do admire and like/love some of them, including Delain. Mostly because of the lyrics naturally, mostly written by Charlotte, and with many songs I can relate to them strongly. I will go here with the obvious song, so if you are reading, and never heard them, start with this one: We are the others. 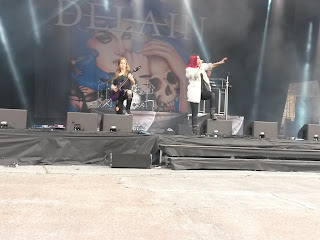 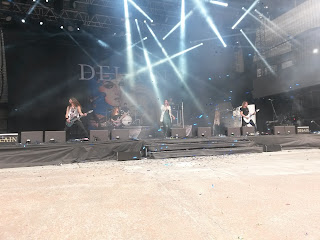 Beer came to me fast enough, so I could properly wait for the best band of the day for me. We both were very excited with Veronica. We both had some moments in our life where a song of Stratovarius helped through a bad or good time. For me it was the second song they played: Eagleheart. I'm always close to cry when they play this. Not my first and not the last Stratovarius show, still all the time I'm floating 10 cm above the ground and trying to breathe, which is quite difficult while listening to them. They played the very similar setlist I've heard last year in Ostrava, but seriously how difficult is to put together an awesome setlist of 17 studio albums? The best moment of the show for me was when Timo came close to us and I got a hi5! We both were headbanging and jumping through the whole hour :) Obvious closing song was the Hunting High and Low, which is the other one of my favourites from them. 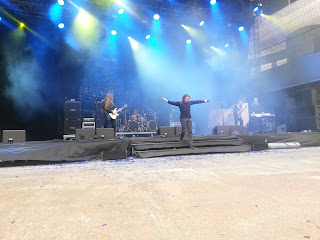 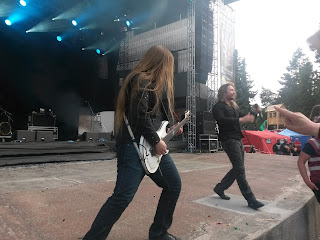 After the show we just couldn't find the way back to reality and wished they just started over again. So we went to meet them on the signing session. Talking over the whole time. She had some awesome stories about Mexican shows - or how difficult it is/was for them to attend a metal gig or festival simply because they were so rare.
I had nothing to sign, but I really wanted some pictures with them. The security guys said that it is not allowed, so I just stepped out of the queue, as really I just wanted some pics. Which I got afterall from behind the fence. So screw you security guys! 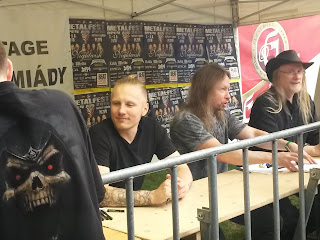 After that we were about to eat something finally, and obviously drink a beer :) And listening to Lordi from above, where the sound was actually very great. Even better than from the first line. It was a funny show actually. when literally the whole venue was shouting 'Fuck you' - THAT was amazing. We were laughing so much. Here you go some uncensored Lordi: Hug you hardcore!

Then I was set out to say bye to Dave and Ike as they've decided to spend the night in a hotel (I still had my tent). Meanwhile searching for them, I bumped into Wisdom. When I've seen Máté, he said - 'Oh, you again?'. I'm not sure if that was a compliment or a joke, but I smiled anyway. Got some fast conversation with them, then headed back to see Zakk Wylde / Black Label Society, as I thought he might play some songs from them too. Hmmmwell. I have to say, I'm not a big fan of 20 mins guitar solo. 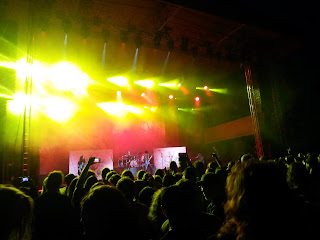 Probably it was great, but I felt extreme tired and extreme hungry, so got half of a chicken, a beer, and headed back to my tent. I bumped into Georgie, and was talking some more at the tent. With all the memories made that day I fell asleep fast, and dreamed about all the magic I had that day.
Here you go the playlist of the songs I've found (as usual thx to Spotify and setlist.fm): Metalfest Openair Plzen - Day 2