So the last day has come, and one of my favourite bands were about to go on stage! This was the day of the terrible towel and vodka in the morning and great recognitions from the stage, heartfelt goodbyes and seeyoulaters. Couldn't imagine my day better when I woke up. We had some serious storm again at night, but the sun was shining and the whole day was supposed to be perfect!

The day on the stage started with a cover band, Motörgang. Guess the original. They were good enough, Lemmy was on the stage at least in appearance, the sound was allright, the songs were obviously from Motörhead. It was an ok start of the day. Right in the morning I bumped into Veronica again at the first row, as she was waiting for Amorphis, I was waiting for Wisdom, so we shared the place again :)
The next band was Mantar. Oh well. They are crazy. Two people on stage, the drums are turned 90 degrees. Weird enough picture. They are also from Germany, playing doom/black metal. The most fitting word for the show for me was: odd. The guy at the guitar and vocals was completely in the show. He was living with the music totally. Furthermore they brought a bottle of vodka to share with the audience. He gave it directly to me if I remember well. And you know.. I don't drink shots. Especially not at 11 in the morning. But oh well... I couldn't refuse, could I? So was drinking (just a small gulp) and passed the bottle further. It could've been fun if the bottle was going as it was intended - through the first line, but obviously it got lost somewhere in the crowd. 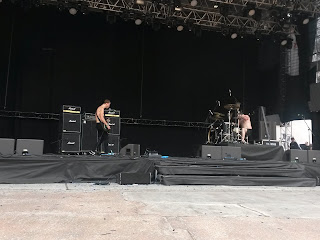 After the show I got an eyecontact with Beni - traveling with Wisdom and I asked him to charge my powerbank in their hotel the night before, so I could have energy in my phone to make some more terrible photos. Got to meet him beside the stage - here goes my 'thanks' also! You saved my life! And then got a fast beer until the guys did the soundcheck and hurried back to the first row beside Veronica. I also bumped to Georgie and Dave and Ike, they were right behind us for the show. I couldn't wait for them to start, I was so so so so excited, wanted to hear some songs from the new album again, and just wished them to have huge success, as this festival is the jumping stone for the 'smaller bands' to get invited to Masters of Rock, and these guys should go there next year, they truly deserve it! So I was ready to do everything, shout my lungs out for them! 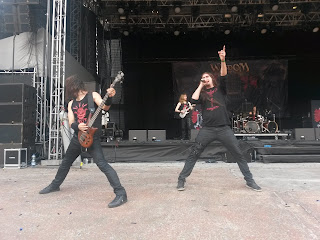 And actually I did, we all did. I think the whole crowd was enjoying the show pretty much, sometimes I was just overwhelmed about the hey-hey shouts I've heard from behind! They did play some old and some new, listen to one of their songs from the new album which was recorded with Joakim Brodén from Sabaton: Rise of the Wise. I personally like other songs from the new album, like Believe in Me, hoping I'll hear that live on Keep Wiseman Alive show in October! Anyway they played also Live Forevermore, which is always a success. I did sing with them all the songs, it was a concert so energetic and powerful, I had the fuel for the whole day after that. Especially that NG was coming close to the crowd often, and once he recognized me from the stage, and was pointing at me, and the best part in it, that the guys took a photo in that very moment. I just love this shot!
Aaaanyway, it was again over too fast for my liking, but I can't have it all, right? :D The stage was taken over by a band from Austria, whom I really wanted to see live since I know Dragony. Sigi is the male voice in this band, and I just love his voice. Visions of Atlantis on the stage, doing the soundcheck. And what am I doing? Shouting 'Sigiiii!!!' when I see him. Right.... Anyway, he recognized me and was waving, which was quite cool! I did enjoy the show allright, I have to say, but they will not be my favourite band for sure. Catchy music, powerful vocals. And what I remember also from this show is that the guy behind/beside me focused on Clementine all the time, and made like 200 photos only about her. Well, she is extreme beautiful, that is for sure :) The show was very professional, good sound and very good usage of the space they had, continuously coming close to the front rows. I liked that also a lot. 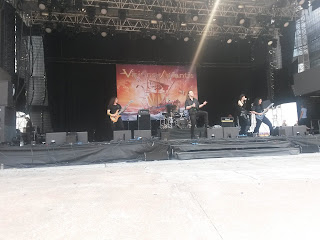 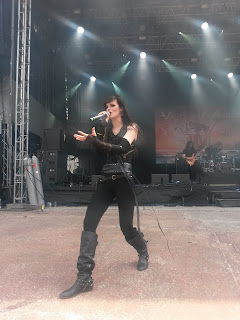 And then I just jumped out of the crowd because wanted to say bye to Wisdom guys, as they had to run back after their signing session. Unfortunately I couldn't catch them again, but bumped into the guys and we were having fun around, talking and joking and learning some great idioms in English, as THAT is the specialty of Dave! Heard stories about the 'terrible towel' of Pitsburgh, which I actually noticed after I went home, and checked some band-pictures. That yellow piece of fabric is everywhere, very visible :D
We didn't even attend to the next show - which should've been Crucified Barbara, but they had to cancel and D-A-D was playing instead. We were just listening from far. 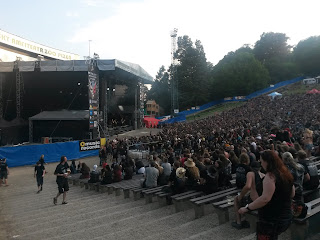 We did go back to the crowd because an other band already prepared, which we really wanted to see from close - especially Georgie. Arkona was about to play. I just love their music, and the way how Masha is communicating with the crowd. She is always talking in Russian. Weird enough for me, but the reason might be that I've seen them only in Slavic-language places, so they did understand it properly. Aanyway, it was a great show, as usual. 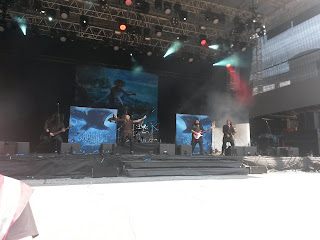 Then we decided to have a beer together - one of the last ones actually, as the guys were about to go home soon enough. So we were waiting for Arkona's signing session, and I was evil, I know I'm sorry (well, actually not that much). I did a small test with Vladimir from the band. In January he photobombed one of my pics in Wroclaw which I made with Heidevolk guys, and I was asking if he remembers me :D Obviously he didn't, but I can't expect it, right? Well I did, and was a tiny bit disappointed, but he asked me to send him that pic, so he will remember next time :) And smiled a bit, which was sweet of him. I can imagine how many people they meet, especially that they had a HUGE 3-4 months long tour around Europe. But they all were very kind and signed anything people put beneath their hands :D
At the end we made a last pic together, as a memory of the past 3 days. BUT they mentioned a festival in Germany, Rockharz, with an amazing lineup, and a promise that they will be there. Hmmmm, I had to think a lot if and how I could go there. But that is an other story ;)
After saying goodbye to the guys I went back to the crowd to check out Epica. (Completely missed Amorphis, as was busy with friends and beers and signings) But Epica's show was just great!! It was my first time seeing them live as last time I was about to go, I went to Slovakia instead for an Eufory show hahaha. It was great, it was beautiful, it was metal, it was fun, but I was already really tired after 3 days' of jumping and headbanging. They played their most popular songs, was a great show, and I have terrible pictures. 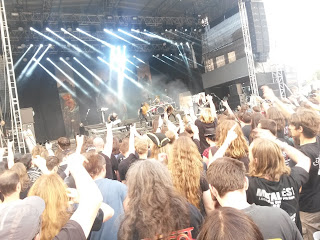 After that I was already lost in my thoughts, and just listened to Dirkschneider from a place far far away, chilling out, and enjoying the last band of Metalfest Openair Plzen. 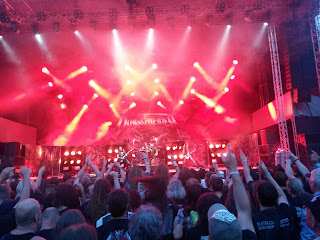 It was a great festival, for sure I'll be here next year too! Very good organization, beautiful venue, and great bands, what else I should need?

This day I also bumped to Carlos, knowingly he will be for sure in the first line of Delain and Epica shows. Somehow we couldn't meet much during these three days, for what I'm very sorry, but I'm sure we will do that in several shows in the future. I really love how he can just lift me up and spin around hahahaha. I need that more! Well, checking his pictures I probably mixed Saturday and Sunday regarding out meeting time, but oh well... it was a great meeting again!
﻿

﻿
Here you go a playlist (thx to Spotify and setlist.fm - and my own preferences): Metalfest Openair Plzen - Day 3

Posted by Concertjunkie at Monday, September 12, 2016
Email ThisBlogThis!Share to TwitterShare to FacebookShare to Pinterest