The first small festival of the summer took place in Duisburg. Rage against Racism. It's a popular topic nowadays, and I'm not gonna dig into it at all. All I want to state that I've never seen more open community than the metalheads. Always open and taking care of each other. Seen many times already, but it showed itself in this festival also so many times and so many ways. Starting with the moshpits, where you just can't see anyone being left on the ground after falling. In those cases the moshing just stops for a second and everyone holding out hands to help the fallen one. It's just an amazing thing to see. Also there were several handicapped people on the festival in wheelchairs. They were treated just the same. This is also what I love: it doesn't matter where are you from, who are you, what language you speak. The music is the language everyone speaks.

So it was Duisburg. I was looking forward to this festival to see Freedom Call again as headliner of a festival and meet the FC family again. To be able to travel so much I always choose the cheapest options. This case was a late night bus directly to Duisburg, the backside was that I arrived in very early morning, and my hotel's reception opened only around 11. I was sitting on the doorstep for hours, then I've chosen to look around in the city. It's a weird one. Quite small in matter of things to see, but calm on the other hand.

Followed my usual schedule doing everything a bit earlier, as the first day of the festival started at 5pm. And I've decided to take a walk to the venue, which was like an hour on foot away from my hotel. The weather was perfect, sunny and clear, so a small walk was ok. When I reached the surroundings of the venue I just had to follow the metalheads, so it was easy to find the place.
It's a small clearing woods around in a sweet neighborhood at the outskirt of the city. As it was already afternoon, I had no problem with getting to the first place they sold beer. But I couldn't get any, as they didn't accept case. I've found out that there will be coin-system for the drinks and food, so I don't have to run around with cash all the time. I do like coin-systems. Clear and I know exactly how much I spend. Aaand the coins were even branded, so I took one home as a souvenir. 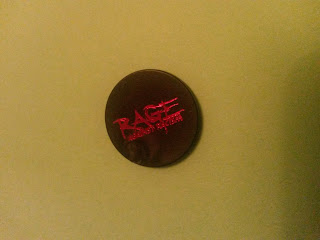 The weather forecast said it will rain whole weekend, but the weather was quite good. Started very sunny, and we just got few raindrops on Friday. Was totally fine weather, the rain came as a refreshment anyway. We didn't need any raincoats :) 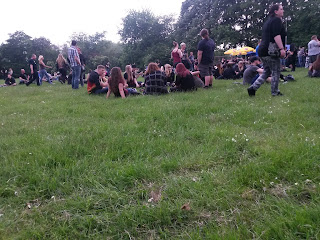 On Friday there were 5 bands on the stage, I was most interested in seeing Kräbholz. As some of you might know I am learning german intensively. So I am/was searching for a band I like a lot who is singing in german. I think I've found them :P

So anyway the show started with Vanir, Can't say that many people arrived by the time they started to play. I was just looking around and listened them from far. Didn't really feel the urge to go closer as they are playing Death/Trash metal, which is not my cup of tea. It was quite hard to find anything to show you from this band, but I managed to use my awesome searching skills and here you go a song from YT: Sexual harrasment.

Then came Ignition. They are a local power metal band, and I really liked them. I'll take the shelter was probably sung. As they are quite fresh band, can't really find a lot about them also, but I liked a lot one of the news songs: We are the force. Listen to the album teaser I found. Dennis (vocals) was taking the band on his back. Very enthusiastic play on the stage, I felt like they wanted to give in all they have despite the early hour they played. Guys, you should be online more, I would love to listen to you more often. I had a feeling that Dennis had connection to the Currywurst booth, as he nicely promoted it from the stage. I caught him after the show, but he seemed to hurry there, so made a fast blurry pic. But a bit later I did taste that wurst, was very ok. Beside that I would go to their show anytime, just please come a bit closer to me :P 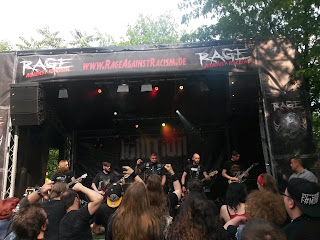 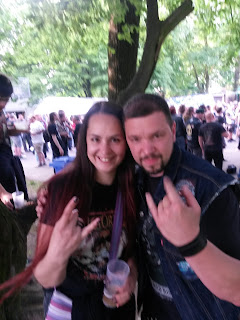 I actually did have time to eat something, because Skeleton Pit took the stage. That sounds bad, aye. Sorry, but I can only repeat myself.. I do not really fancy trash metal, which they played.
I know some of you like the genre, do go and listen to their full album!!! Chaos at the mosh reactor. Soon enough people around started moshing. I have to say that during these 2 days I enjoyed seeing the moshpit a lot. These people were awesome. And Skeleton Pit just got them in the right mood already! 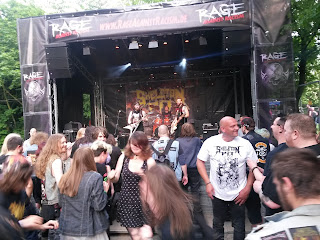 Who's next? Oh yes, SuidAkrA. Do I have to say? :D Yes I think I do. They were really great. I loved Tina's voice was amazing. Truly amazing. I still don't like growling, but the show was awesome, I felt I might get to like some growling if the music is extraordinary, and they don't do it a lot. And they didn't. Listen some of their songs from the new album: Pictish Pride and The Hunter's Horde. I was able to understand some of the lyrics, so I did enjoy it. 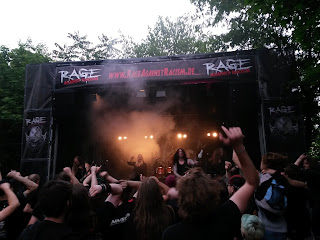 Meanwhile I met some new friends. I can't really remember how I got to talk to them, but I did. 3 guys from Duisburg or around. If I want to be entirely honest, I had to focus a lot to understand their names. Rafael was easy (sorry dear, I can remember your name pretty well), his parents are greek, but grew up in Germany, Caramelo (I'm truly sorry, but I have no idea how you introduced yourself), italian origins, and Chris (actually said his nickname like 5 times, and I still didn't get it, probably was Sauer). These guys were great to be with, funny and original. There was a girl with a terrible eyebrow (all plucked out and a single line drawn instead...), and Raf said to her that her face is pretty but the eyebrows are, well... awful. You should've seen her face after :D I laughed my ass off with these guys. I truly hope we will meet on an other festival (maybe Rockarz?).

At last the most anticipated band took the stage: Kärbholz. Honestly I have no idea which songs they played, but it was a very professional show. The fans were singing with them, clapping and jumping.
I couldn't help myself doing the same, even tho I didn't know any of the lyrics! I think I've finally found that band I can listen to in german. Here you go 2 songs from them: Kein Rock 'n' Roll and Fallen und Fliegen. Since the festival I've listened to them a lot. And I really like them more and more. They will have a winter tour around Germany, which I will attend for sure. By then I might even get myself together and dare speaking with them in german :D 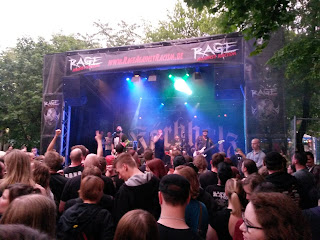 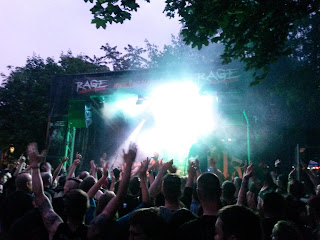 I don't have now setlists, as these bands are barely on Youtube, let alone Spotify. Guys, I bet people would listen to you more if you upload yourselves! Do eeeet!

There was the funniest moment of the night when Chris offered to walk me home. I was telling him, that it will be an hour of walk, he misunderstood me, thought like 20-30 mins :D We started walking when he realized what I said, so we walked back to the train, and got home actually in 20 mins. We met some crazy girl on the train, who kept saying how süß I am, but all in german. It was a fun ride home. We parted at my hotel, and agreed to meet next day again at the train station! I can assure you, if you think the first day was fun with a lot of good music, the next one was even better!


Posted by Concertjunkie at Sunday, June 19, 2016
Email ThisBlogThis!Share to TwitterShare to FacebookShare to Pinterest