Let's just jump in the middle. I do like to support local bands and go to small shows. For that I need to know at least one of the bands playing.
This happened some time ago - somewhere in the beginning of May. I've met Adam and Maciej (already told you about them earlier) at a Rhapsody show. It turned out, that they do have a power metal band in my city, Wroclaw. The band is Aeonian Forge.
I did encourage them to invite me for their show, so I can finally dive into the local music. They just did, so as I promised, I went to their first show.

It was a pretty nice evening with four bands, and they played in a sweet club also.
The funniest part, that in Wroclaw there are like 20ish clubs in a very small area, and I used to go to one of them especially, as most of my colleagues liked it. And this place where they played that night was literally next-door.
So I took my bicycle and got there pretty fast. HardRock3 is an underground club with a friendly decoration - like a dollhead or if I remember well some shoes on the ceiling. But anyways the walls are full with posters of great bands, LPs also in frames. The most shocking one was an Omega-single (they are an ooooold hungarian band), I kind of grew up listening to them 24/7. 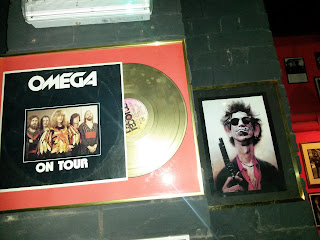 Right in front of the club I met the guys already and they really seemed to be happy to see me. Fast got in. Have to say that the entry was extreme cheap. Even less than a beer. So got my cool black dot on my hand proving I paid, I could get my beer and look around.
As we are talking about small bands, they did the setup themselves,  therefore we started a bit later than announced.
The first band was Cervisiam. I was told that they play some kind of rapish metal. I thought oookey, let's see. Actually they were quite ok. I do understand a lot of polish, but when sung it is harder, so I can say I didn't understand much. Therefore only the music left for me to enjoy. Here is a song from them, which they probably played: Piatek. They did a fun show anyway. Was a good start of the evening.
Then came the guys from Aeonian Forge. Good solos, great drum play. I truly believe they can grow a lot more, and we'll see them on some festivals in the near future. Just keep up guys! I've found some songs on Youtube from them, here is the one they also played that night and I enjoyed a lot: In the name of Metal. 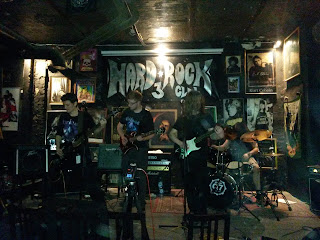 Then the two other bands - Black Grin and Inner Beast from Poznan. They played enjoyable music, but I really needed some beers by that time. Took my place with the guys I knew at a table and listened to the music from there. It's always good to have live music while sharing some beers with great people.
I have to say that I was more silent than usual as everyone was speaking polish, and I still don't feel that comfortable speaking it.
Anyways, the night was great, and the guys won the voting from the people.
This time I don't really have playlists, these guys can't be found on Spotify yet unfortunately, so listen to them on Youtube, worth a shot!

Posted by Concertjunkie at Saturday, June 11, 2016
Email ThisBlogThis!Share to TwitterShare to FacebookShare to Pinterest