I'm living in Poland for more than 3 years now, and every year they organize a Guitar Guiness Record on the main square of the city. For whatever reasons I missed the first 3, and this was the first for me. Additionally they have organized a 3 days festival around 1st of May celebrations with a bunch of rock/metal bands. However I've been only on the first day, as one of the bands I wanted to see live for so long was playing. The line-up was quite impressive, Status Quo, Dragonforce, Guano Apes and Within Temptation. Unfortunately the four bands were playing on 2 separate stages in the same time, so I couldn't see anything of Guano Apes, but the other bands were awesome.

But let's not rush that forward. In the early afternoon the guitar record started on the main square. Imagine 7356 guitars playing Hey Joe at the very same time. It was amazing! 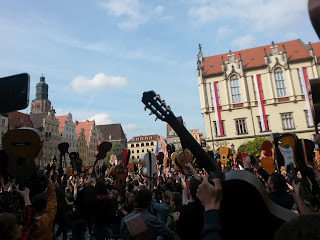 When they all lifted up their guitars in the air, THAT looked great. Some of my friends were playing there, but at that point I haven't met any of them. The whole record attempt was like 10 minutes. And actually right after it ended I headed to Hala Stulecia, where the other concerts took place. I was obviously with my bicycle. It's not a huge distance, around 20-25 minutes riding.
Well.. the riding part would have been ok, IF... around 200 meters before the goal I didn't get a flat tire. YEEEY. So with the thought I have to walk home with my bike at night or ride it with flat tire, I went to the venue to prepare (=get a beer) and take the first line. Meanwhile this ritual I finally bumped into my friend, Julia, who I met last summer in the Czech Republic. She was also playing on the guitar record with her mom together!!! Freaking great! Was so happy to see her, and could talk a bit in the second row.

The first band outside was a polish very well known band: Dzem. Probably my father would know them better than I do. The average age of the audience was around 50. Which I find extremely awesome. Quite similar audience as it was back for Status Quo - quite similar music too. I would really recommend to check out the playlist (end of the post) when you are opening a beer at home with some friends (please don't kill me my polish friends!) I had a broad smile on my face when Mr Santa Claus got on the stage. Nevertheless the band did fun. it was a nice starting of the evening. I was clapping through the show and nodding my head whatever they were singing, and listening the people around me shouting the songs. Was a bit weird to be there at that moment, but that actually saved my place for the next band. 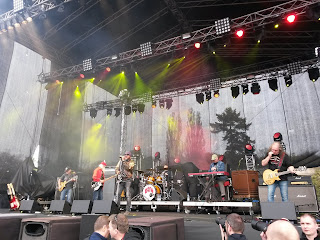 After Dzem the people right in front of the fence slowly went away, so we could literally have the first row already. With Julia we were glancing to the backstage and were just smiling when spotting some of the guys of Dragonforce! And they came out! They really did. And I didn't have to travel for them for a change :) They put on an incredible show. Played the very fav songs some kind of best-of set, and was living with us throughout the whole show. Here you listen and watch: Cry Thunder! The guitar solos were incredible. If you ever could, go for their show, if I could, I would do it again. Oh wait! I will - let's meet at More Than Fest in August!! They'll headline it! 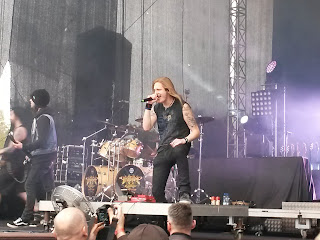 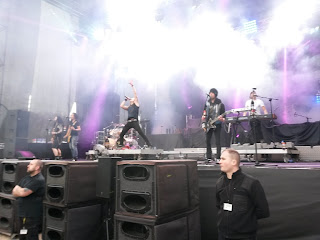 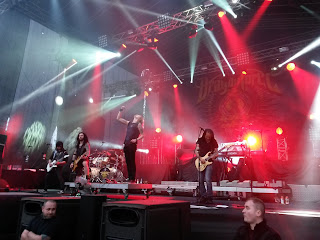 Very unlike of me, I didn't jump in front of the backstage after the show, but tried to run into the hall, where Guano Apes was about to finish, I hoped to see one or two songs there, but I got out so slowly, I couldn't catch them at all unfortunately. But the fortunate thing in it, that I spotted some friends there. Adam and Maciej were heading to the backstage to make some photos with the guys. It's funny, as I knew I'll meet them for sure next week on their own show with Aeonian Forge. And when I told them - sure I go, that's not a question, I've seen the happiness on their faces. That was cool!

For my journey out, I met some other friends. My colleague and friend, Tomi and his wife came out also for Dragonforce, but not the front, so we could meet only after the show. It was good to share the first excitements with someone on my own language! The funny thing is, that he said something like - I look completely different than at work. Obviously, as THIS is my environment, here I feel myself, truly myself. They didn't want to come to the next show, and just went to listen Status Quo (as next day was a workday for us yey). We parted our ways. 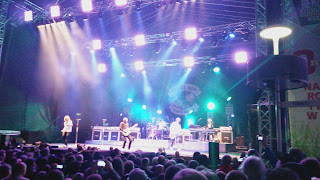 So, as I didn't catch Guano Apes, I went back to see the beginning of Status Quo, as Within Temptation was about to start in the middle of their show inside. But I really did want to see them.
When I told to my dad that I'll see them live, I've almost seen tears in his eyes, as it was one of 'his' bands when he was young. Well, he is still young, but in his longhaired times. If I remember well, we even had vinyls at home! So I pretty much grew up on this kind of music (ye I know my dad is awesome!). So I also made a video for him. And you just can't imagine how happy he was when I sent it to him to watch. Was like I fulfilled one of his own dreams. I do have difficulties to find words what I felt at that moment. I just truly wanted to hug him, but Skype is not the best platform to hug people.

Anyway, it was great, but Within Temptation was about to start, so I moved in. I didn't aim to get to the front, as they are not my very favourites, I listen to them quite a lot tho. I will not write novels about this show, as I honestly didn't like it. I was standing in the middle somewhere, so the sound should've been good. Well it wasn't. It was literally weak. Around the half of the show I was even thinking to leave, but I still waited for the big boom, the songs I really love... like Ice Queen. Even those didn't bring me the thrill. Can you imagine I was yawning there? I couldn't. This show made me re-think one of my trips to Ostrava, where they will be the headliner... Not quite sure at this point that I want to see them live again this year. We will see. 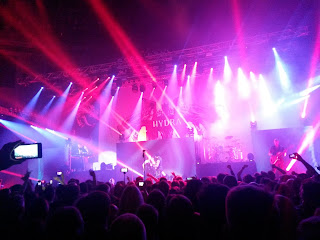 I was thinking to catch a bus and take my bike home with it, but there was no chance, they were completely full. Nighbuses, imagine. So I half walked half rode home to sleep some hours before next day's work! Perfect! :')

Here you have the playlist on Spotify with a bit of help from setlist.fm: Dragonforce - Within Temptation - Status Quo - 01/05/2016

xoxo \m/
Szi
Posted by Concertjunkie at Tuesday, May 31, 2016
Email ThisBlogThis!Share to TwitterShare to FacebookShare to Pinterest