It was not an easy decision which concert to go of Van Canto Tour - Voices of Fire. Austria, through Germany, several supporter bands I like, like Dragony, Victorius and Freedom Call.
At the end I've decided to go to Hamburg as it was on a weekend, been there ages ago last time, so it was a good opportunity for me. I'm wondering sometimes about my organizing abilities (and my luck), just like this time. I managed to book a hostel 10 minutes walk from the venue. If you read my blog, you know the drill already: long story short - arriving in the city, getting my stuff to the hostel, preparing for the show and there we go. It happened just like that this time again.

I have a feeling already that wherever I'm going around Europe for a show, I will meet some old friends. And obviously get to meet some new friends also. I hate to repeat myself, but these people are freaking awesome. This time I got to the venue like 30 mins before the door opening, and I already saw Jenny almost the first in the line. Jenny is sweet. She is singing (check out her page) and we have a lot of bands in common which we like. That's why we met first time in Berlin last December on a FC and Vexillum show. And now again - surprise, surprise - FC and Van Canto! So I texted her, she saw me, and I already had my place in the front! It's soo funny that she almost could be my daughter hahahhahaha. 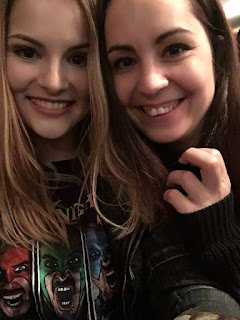 As I've never been in this venue, I just checked out everything - put my stuff in the cloakroom (mentioning because it will come back at the end of the night), got my beer and checked the merch.
My eyes went very O,O when I've seen a desk with Sea Shepherd. These guys are extreme cool. I need to add some words about them, not only because I have a friend in Hungary who dedicated her whole life for their cause, but because they do what we all should, just don't really have the strength or the will. They are out on the seas for us all saving whales and dolphins, and all animals. They are voluntarily risking their lifes for us. My friend, Vera went on the ships to fight against japanese whale killers several times already, and for that she has my biggest respect. I sent her the photo of their merch right away feeling proud to have any kind of connection with them. 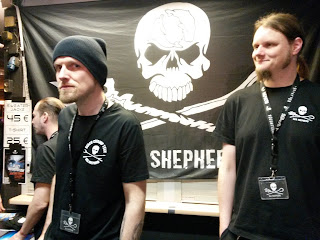 And then with my beer got to the girls (Jenny and Sarah) to the front line. Well actually the second, but they are not that tall, so I've seen everything ;)
Grailknights started the show. As I've seen pics about precious shows, did not strike me that much how they came out to the stage. It was fun. HUGE fun on the stage what they did. They are definitely that band, who I'd see anytime live and listening to CDs just as much. When they started with Dead or Alive and Morning Dew, I though it cannot be better, but then again it was my mistake thinking after two of my fav songs they will not surprise me. Oh they did, when Inga came out of that animal, was fun! Plus I enjoyed their fight with Skull also pretty much.
They enjoyed the show, which radiated around, the sound was great despite of that I was very close. The guys seemed to have just as much fun as we did, was a blast and extremely refreshing experience of a gig. Not even talking about how they were after the show :D
The crowd were literally crazy. And I felt like a mother-chicken defending her baby chicks there. The girls were in front of me, and I just held my back and fought with the evil moshing guys. I believe I was the superhero there. You know.. when nobody knows you defend them. Not that the girls would be weak, but I had this instinct. So I watched the superheroes as a superheroine! 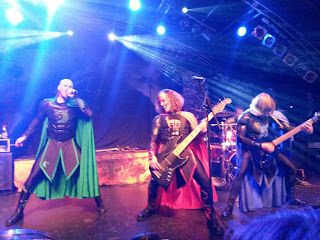 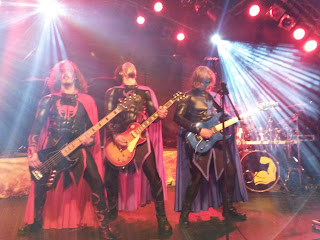 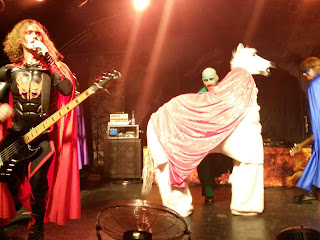 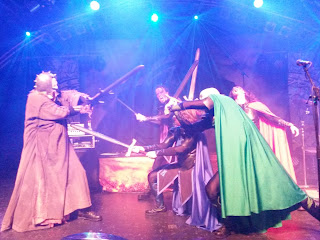 After this fight of superheroes against the most evil I needed to drink some more, so left the girls defending the crown. Meanwhile I got some patting on the shoulder for my toughness from the guys around. Was a great feeling to be entirely honest. The experience and years you know :)
Anyway the show I was waiting for the most this night was about to start. Freedom Call is on the stage. I could talk about them in superlatives. I usually do it. But now I was a bit disappointed in the guys. Yes, I'm writing good and bad also, not only the fun and happy part.
The show itself was a true Freedom Call show. Jenny even let me to the fence for some time, which was great to see be there for 2-3 songs, headbanging too. But I can enjoy it even from where I was anytime. Literally from anywhere. Closer the better obviously, but that does not really matter anymore. First time this year when I've seen them in full squad - Lars on the stage. His hair straightened. WTF man? I don't like what I see... Apart from that they've put the show on the table as usual. Their set was already quite familiar. Let's just state it here that after 666 Weeks Beyond Eternety album they are coming with a new CD this year. YEEEY can't wait!!
Unfortunately none of my pictures I made is presentable, but oh well, the feeling makes the show good, not the pics.

Oh, and why I'm disappointed in the guys. After they've finished, wanted to say 'Hi' to them around the merch. I thought they are ALWAYS coming out. I connected it with an other beer-buying trip, and went out from the second line. And they didn't come. They didn't come till the beginning of Van Canto, which I didn't want to miss, so I went back. Not that close as I wanted to, but still heard them in a very very good quality.
Whenever I tell to my friends (not really from the metal/rock side of music) that they create a capella metal, everyone looks at me like I'm crazy. I might be, but Van Canto still produces music that nobody else. Only one set of drums and voices and only voices. Obviously they make some covers to redefine the big hits of metal scene. But they do have their owns, which are even better than the covers. How all their voices fit together is truly amazing. As this was one before the last stage of their tour, I just felt how much I regret not to go to other shows. But oh well... I've asked Sly (lead singer) if they are  planning to go to any summer festivals, but he said unfortunately not this year (I still hope they will), because of the new CD, the production and the tour, they need to rest. Which is totally understandable, not for the fans tho :P 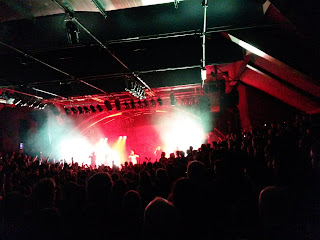 After the show I was just giving my usual self, and waiting for the band, chatting and smiling like an idiot. Naturally almost all pictures I have a beer in my hand... which is weird. I don't even know how that happens all the time that on the pictures I always have beer, literally always... Anyways, I had some quite fine conversation with the guys, which is just strengthening my beliefs in musicians. They are just as cool as anyone else :)

Also managed to talk a little with the girls and met a new friend Carlos. He is the hardcore version of me :D I believe he will be on every major festival this year, some the same as I will be, so we already agreed to meet again. (I think next time Metalfest Openair). I have no idea what time it was when I was about to go back to my hostel, but I think it was around 1-2? Maybe a bit later... The scariest part of the night was when I've decided to go and hugged everyone around me (because hugging is cool), and headed for my coat. First I've found an exit. I thought - It will not be that ok to go home without my bag and coat, so going back. The door leading to the cloakroom was closed. Then I started to panic a bit, but then asked around, and found my stuff in an office room. As the last stuff there, they just thought I might have forgotten about it. So everything turned out great at the end. And had a fascinating evening again. Hopefully we'll meet with these guys rather sooner than later.

And here comes the setlist made about this evening from Spotify: Van Canto - Freedom Call - GrailKnights - 16/04/2016 Hamburg

xoxo \m/
Szi
Posted by Concertjunkie at Monday, May 23, 2016
Email ThisBlogThis!Share to TwitterShare to FacebookShare to Pinterest