So back to end of May, a sunny Saturday with the Freedom Call family. We were all worried a bit that the weather will be windy and rainy, but the sun was shining and I was heading to meet Sauer at the main train station to go together to the second day of Rage against Racism. 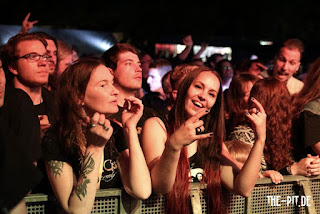 I wanted to get there even for the opening act of the day, even though he said it will be boring and totally not metal, but I didn't care at that time. I just wanted to be there for the whole day.
Musicorps is a brass band who actually plays marches and cover songs and some classical stuff. It was very funny to see. There were even grandmas and grandpas listening to them in 'bandshirts'.  They started at around 1, and we started to drink at the same time too. First beers, some food and I was prepared for the first bands. At least I thought so. 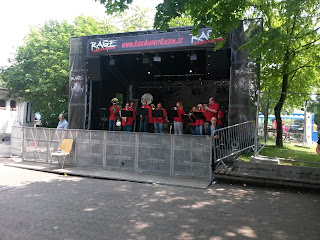 Pit of Doom and Fuck Yeah! Well. I'm still struggling with music where I don't understand the lyrics. Pit of Doom actually had quite a few fans around as it seemed. They won the slot battle to get on the stage, and it was great to see a girl on the bass, and a guy singing behind the drums. Very unusual picture I have to say. He was doing a great job, more than multitasking. I did not understand anything, and beside that I just missed a singer from the front. You know, someone who leads the whole show, running up and down, making the audience move. It is hard to do from behind the drums. Nevertheless people around me enjoyed it way more than I did. 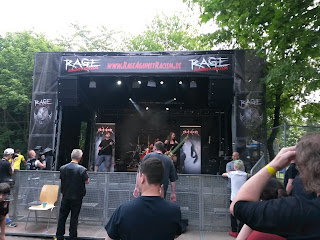 Fuck Yeah! more or less the same style with me around the food stands and the bar. Around this band and the next, Larceny I spotted Bas and Pieter, and I already felt better and better. Then I've found the others also, the whole family, additionally Ilona, Bine and Martina whom I met at the first time. And I can say, they are just as crazy and cool people as everyone else I met on a Freedom Call show. Seems they are all happy people. 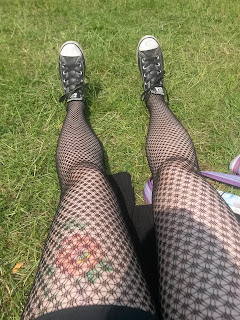 Anyway when Texas Local News got on the stage, I was truly hoping that they will start to play some music closer to my heart. I was definitely positively surprised. The energy came off the stage was extraordinary.
Actually they might make me like growling and that is saying something. Check out this song: Disclosure. Carla's voice is amazing, sounded even better live. They were playing with a great amount of enthusiasm and put a show on the stage like I haven't seen before on this festival. I really did like the guitar solos, and how they interacted with the crowd. If I can, I will go for one of their club-shows! 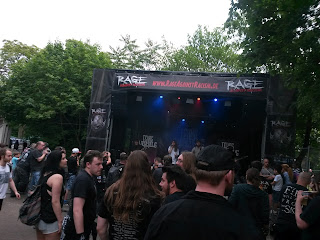 And then came something I truly love. A power metal band from Bochum Dawn of Destiny. Female vocals with male back vocals. It was great! I did enjoy it a lot, catchy melodies, and speed and power. That is what I need! Check out Angel Without Wings and To Hell :) Could even talk with these guys after their show, and they are extreme nice people. 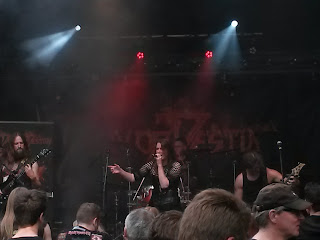 Here I have to add, that the organization of the festival was real german! In best meaning of the word. Every show started exactly at the announced time, they were perfectly ready with the setup by the starting time. With ALL bands. For a change we went for a beer. Well, I did not count all the times I did that, as the beer was in a 3dl glass, and had festival-quality, but a quality of a german festival :) So it was not a big deal take in one after each band.
And then some serious change on the stage - Black Messiah! They play folk metal. Gosh!! I have no words. Not only because the music was great, but because the people were awesome. The moshpit was extraordinary. I've stood at the round of it, and these people there had so much fun I almost wanted to join. The first time I've seen people doing situps together in the moshpit. We have even joined them with Pieter. It was fun! Besides the music was truly great and it was totally headbangable (this does not sound right :') ). 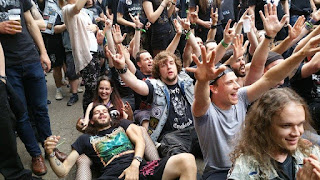 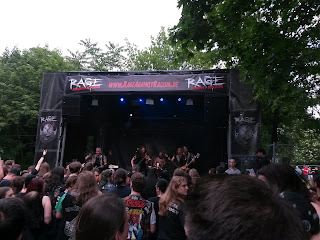 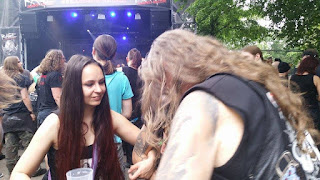 After the show we went back to the merch with Monique to meet the bands, because we both liked them a lot (the last 3), and were talking with those guys a bit, also making the usual band-photos.


Was talking quite a lot with the guys from Texas Local News, it turned out, that the guy on the guitar has hungarian relatives - as in his granny is hungarian - I still need to find him on Facebook, because I promised some help to find her. Then we were even playing some flunky-ball. I had no idea about this drinking game before, they did try to explain tho, which I didn't understand at all. but at the end when we started to play, I got it. At least I thought. We were losing, when I had to hit the cup, which I did, but I forgot to drink. I blame Uwe, because he said to me that he will just say when I have to drink, and he didn't. So we generally lost it, but was fun. 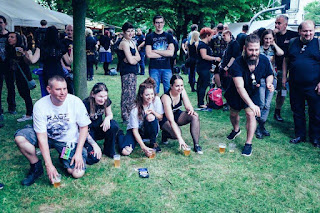 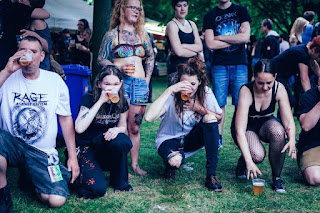 Ok, if you don't know the game, this might have sounded as a blablabla, so here are the rules - at least how we played it:
2 teams all with a cup of beer around 10 meters from each other in a line, so all of us more or less in the same distance from the middle, where we place an empty cup upside down. And then we have the ball. The ball can be a real ball, or you can just use a t-shirt for example. Then a member of one team has to throw the ball to the cup in the middle. Preferably hit it. If it is hit, then the team drinks until the other team puts back the cup in the original position and gets the ball. Then they say: Stop, so the team stops drinking. Now the other team is throwing, etc. IF you don't hit the cup you don't drink. The goal is that all the team members have to drink the beer first.

We have spent actually like an hour or so around there, and couldn't see Dust Bolt, I only heard it. But by Carach Angren I wanted to go near the fence to have the first row for Freedom Call. I honestly didn't enjoy much of Carach Angren, as I didn't understand a single word what they were singing. Was not really growling, but meh. Check it out yourself in the setlist at the end of the post.

Aaaanyways. By the time Freedom Call started to play, we have managed to be in the first line with Monique, and I've seen the others around 10 meters away from us - also very close. I don't even know what I can write about the show. It's simply always fantastic! Now Chris even seemed to be more cheerful as usual, a true happy metal show. We jumped, made some awful selfies, and got caught by professionals. I thoroughly enjoy those pictures, here they are: 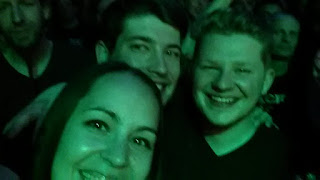 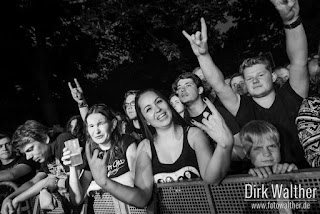 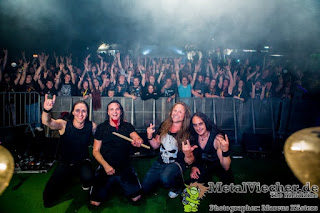 Obviously I was not able to make a presentable pic of the show... as usual lately.

And after the show I was spinning around and around as I was speaking with Ramy a bit. You might remember when I was writing about the last show of Freedom Call with Van Canto and Grailknights, that they didn't come out after their show. Now.... Ramy apologized because of that. First - I didn't find the words what to answer for that, as it meant that he was actually reading what I was writing (1st step to heaven). Second - he even explained why it happened, and said sorry. At that moment I felt it is totally worth to write this blog, I know some of you read it but will never react, and that's very ok. Besides I couldn't even pay any attention to Ramy when he said it, as I was so happy. I remember burying my face to Sabine's shoulder, probably she thought I'm completely crazy, but oh well, I surely am. After that we went to backstage with the guys, was talking some more, then had to part. It was an awesome start of the summer festivals!!

Here you go some kind of setlist to listen - couldn't find a lot tho: Rage against racism day 2 (powered by Spotify and setlist.fm)