So June arrived, and I was hyped to get to Metalfest Openair in Plzen, Czech Republic.
The lineup seemed amazing, several of my favourite bands, some of those I was about to see first live, much anticipated Festival for me.


My arrival to the camping site was one of the scariest experiences I've ever had. As I was working on Thursday, after work I headed to Prague, and from Prague to Plzen by bus. The original idea was to get to the festival late night all right. But I didn't check the road to the festival. Seemed to be like a 30 minutes long walk from the bus station. Well... it was not. First I didn't find the exit of the bus station - it was around 1 am if I remember well, then I started to walk in a completely empty city alone with a huge backpack and my GPS in hand. The road was quite ok until I reached a forest. At least it seemed to be a forest in the dark. Pitch black, and the trail was around 1-2 m wide. Fun, I thought, and took out my torch. Even with that I didn't see anything, as the battery died. I was walking for around 30 minutes in the forest, and already started to feel that wet fox-smell you know. I thought I'm totally lost, when I saw some light ahead. Before the light there was a guy coming from the other direction, who scared the sh*t out of me. I was almost screaming. Anyway, found the entrance to the campsite, and as I didn't have much light, I set up my tent in almost complete darkness. It turned out that I managed to find a nice camping site, and my tent also was assembled properly. After this small torture I settled in the tent, when it started raining like hell. Great - I had no waterproof anything with me - no shoes, no coat, no nothing. It was the beginning of the summer afterall....


So this was the beginning of the festival for me, then I woke early checking the surroundings and the weather and such. I even managed to sneak in the showers first morning (for what I should've been paying, but there was nobody there...) Ok so that was done, then I got my wristband allright. And then came the first challenge. I had no cash with me, as it was announced, that there will be ATM on the site. Well, there was, it was just not working. Before the first band I went there, a girl said one hour and it will work. Allright, so no beer for my until that, I can survive :D


So I checked out the venue. It is an amazing place, a natural amphitheater-feeling. The stage was huge and the fence was not that far from the edge of the stage. I took my place right in the first row to check out the first band: Eagleheart.  I did have a bit of time to listen some of the bands before, and Eagleheart was one of the bands I had huge hopes for, because they do play my music, and Spotify is my good friend... Here is one of my favourite song from them: Moment of Life. As the opener of the festival, there were some sound issues with the vocals, but at the end they fixed it, and the band just set the right mood for the day ahead. I was also happy that they sing in English, I could understand a lot! I pretty much liked the guitar solos, and in general the band's attitude to the audience. It was really great start. 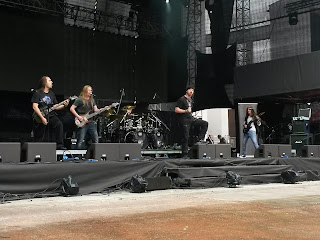 Obviously after a good show I wanted to get my beer - and money from the ATM. The girl was already smiling at me when I asked second time if it is working already. And she said again that I need to wait an hour more. I started to panic what will happen if they won't fix it, I also started to be hungry, and didn't really want to leave the festival to wander around searching for a shop where I can pay by card or take out some cash... I've just decided to give some more time to them and went back to see the next show.


Death metal came to the stage with Entombed A.D. from Sweden. What can I say? What concerns the music, it was really great, but.. and I suppose you know already my buts in this matter. I like to understand the lyrics. Regardless my taste of metal, it was a great show, I really liked how they came out and managed to kindle a small moshpit this early first day. 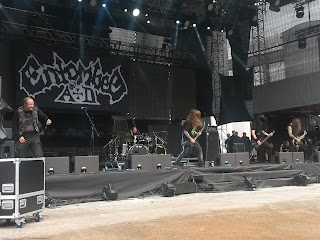 And again after the show checking the ATM, still not working. Got told again it will work in an hour... What could I do? Go back to the stage and see Grand Magus on the stage. I really like what I listen on the CDs, but the show did not enchanted me. Not saying that it was bad, but I was very hungry and in a need of a beer. I'm always amazed what 3 people can do on the stage. these guys were good enough, I still prefer Rage as a 3 people band. 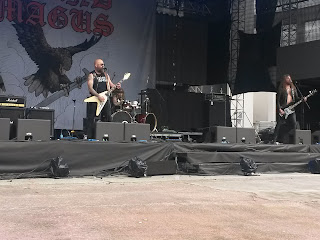 Guess what happened then? I went to the ATM, which was still not working. I didn't know what I'm gonna do if it will not work whole day, I started to be really hungry. BUT it was no time to start searching for anything, Gloryhammer was about to play! That was a MUST to see that day. Let's just say, that their show was the biggest reason I came for Friday also! I fought my way back to the first row, was not that difficult, they still played early afternoon. (Such a funny coincidence - I'm writing this post with people surrounding me, and one of them just said 'universe' - completely right timing to set the Universe on Fire) The show was truly fantastic!!! As was expected from these guys. Played the usual set, still very entertaining. The Intergalactic Space Metal is something you need to experience live. The storyline on the CDs are just amazing, you need to know the background, but live it all makes sense. Legend of the Astral Hammer and Angus McFife... I hardly find words for it. And it just finished so soon for my taste, but it had to finish, right? They couldn't play whole evening unfortunately... 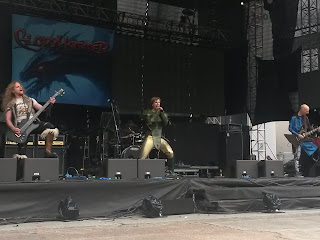 Then I've decided to meet them on the signing session which started in around 20 mins, but first I really really needed to eat something. So last try at the ATM. Obviously it was still not working. BUT. I started to talk with a guy there - clearly in the same situation as me. So he was Georgie, and soon a friend of him and his formal teacher Dave arrived. Odd combination enough - I thought. A guy from Russia and a teacher from the US. Great, at least we didn't have any problem with understanding each other, which was a HUGE surprise for me in the Czech Republic. Fortunately they also had the same plans as I did, so we went out together to get some cash from an ATM close enough to the venue. Georgie checked its place on the phone, so we didn't just go blind. Also had to run a bit because of the signing session! It turned out very fast, that the lack of a working ATM was the beginning of a friendship. We have found out common interests, same music taste, what else we'd needed? Oh yes, cash.

We were almost running back. Dave had an agreement with the band, that whenever they are playing in the Czech Republic, he will get them a pineapple. Weird enough, I know right. So we had to stand in the queue to secure that promise. The security guy was about to close the line right after me, as the given time was over. Which would've meant, that Dave and his pineapple can't reach the band. So I've decided to switch places. Afterall a promise is more important than my pictures :) With that small gesture I made him very happy, and from that moment we kinda stuck together for the festival with him, Ike and Georgie. 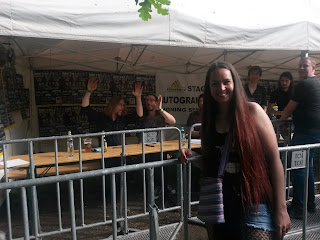 Unfortunately because of this signing session and the chase for cash we missed Bloodbound and Heaven Shall Burn. Was just hearing them from a distance. After the pineapple-gift we managed to catch the guys at the entrance of the backstage also. Where I found out a lot of things about the dragon of Gloryhammer, Paul shared some secrets also, how they travel with her (yes, it's a she), what they feed her with, etc. Was a very very interesting conversation I have to say. And then the picture, which pretty much describing my whole festival: 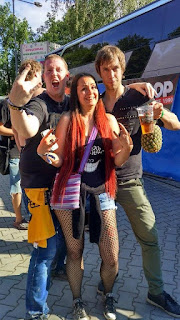 Then the time we got back to the stage was Almanac playing. A Symphonic Power Metal show. It was great! Tho it didn't blow me off my feet somehow. It was nice, great music, great show, great performance there, still I had Universe on fire stuck in my head (actually for the whole week after). I will need to see this guys also at least once more on a single headlining show. I have a feeling that they are perfectly able to catch me, as listening to them gives me the goosebumps time to time, so the live show has to get there too. 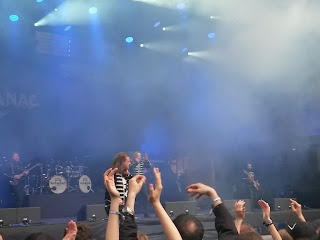 While I was fighting my way back to the stage, met some sweet Czech people simply by photobombing their picture. We had some great conversation in English about the usual topics - where are you from, etc... I haven't seen the mentioned pic, but here are some funny ones:

Obviously after some more beers I managed to get back to Nightwish. You can like or hate them, miss Tarja or love Floor, but you can't deny that they do fascinating shows. Whoever seen them live at least once, will agree with me. Generally I prefer male vocals, but I like Nightwish enough to shout through their show and to know almost all the songs. In the middle of the show I've found again the guys, so we had fun for the show again. They played old and new, and just stating the obvious cliché... how can you not love Nemo or Elan?? 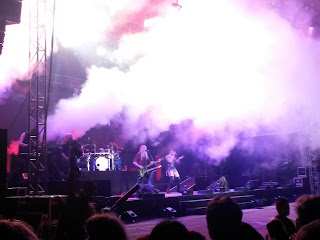 During the show we met the ghost who was with the guys like continuously after this moment. I even captured him on the picture, and we noticed only later on, that he was here at the first night with us :D 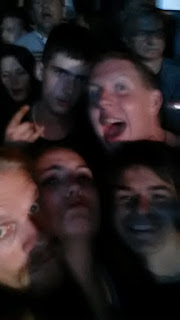 And the funniest surprise of the day was when it turned out, that the guys had their tent around 5 meters from my own. So we just spent some more time in a beertent close to our tents before trying to make some bonfire. Ike succeeded allright, but a French guy managed to screw it up with some dump branches.... oh well. We called the night then.
It was a truly awesome day, I fell asleep with the Universe in my head and a big smile on my face.


Not a full setlist, but some great songs for you (obviously powered by Spotify and setlist.fm): Metalfest Openair Day 1