This night was first in many aspects. Don't even know where to start... After 2 weeks being at home, suffering from huge fever and every other part of a serious illness, I had doubts if I should take my boots and go to Brno for Sabaton and Wisdom concerts. Afterall I felt way better so with all the medicines I had I packed my backpack and headed again to Czech Republic.
One of the very first concerts when I didn't particularly go for the headliner band. Sabaton is great and I love them, still I love Wisdom more. 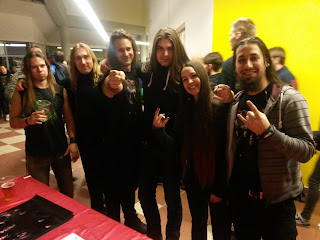 After 2 months Sabaton is on tour again. Their first show was in Brno. It was in a huge sport hall (Hala Vodova), and was a sold out show. And a first again. Never been on a show which was sold out. Got to know later, that around 4500 people gathered for this night. It was very visible even at the entrance. When I arrived around 40 minutes before the gate opening, there was a queue already, which was around 100-150m long. Slowly slowly we got in. I had a sitting ticket, but hell I won't sit on a concert like this!
Next first for me: due to medication, no alcohol. No beer for me! Was kinda weird not having beer in my hands on a metal concert. Well, water as a substitute is not that good I can tell now. When I got in, there were already fans around the stage. I didn't care much, got myself into the crowd and found my place in the 1,5th line. Not right beside the fence, but close enough. Still had time till the show, but I couldn't socialize (an other first). These people here don't speak english! Nothing whatsoever! And I suppose I got myself surrounded with a bunch of morons or they didn't want to talk. I tried, failed. I gave up trying. Why to meet not-cool people?

I was very excited to see Wisdom again. Seen them coming out from the backstage, and as I was close I caught Tomi's eyes, he recognized me and waved back to me! :)
The show was amazing. They've played a nice set, even 2 songs from the new album (Ravens' night and Rise of the Wise), and Out of Control from Battle Beast which was written by Anton. Their set had some of the very well known songs also like Live Forevermore and Somewhere Alone. 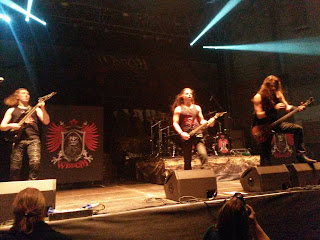 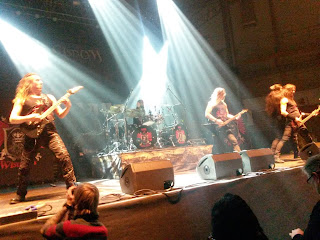 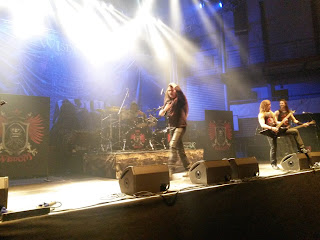 Was a great show, I shouted out my voice (which I didn't have much before...) and it was over too fast. I need I just need Wander the World sometime live. Anyway after it I pushed myself through to the side of the fence, Tomi came out, collected my usual hugs, and we could talk some minutes, and he gave me a stick. Yes, it is broken. 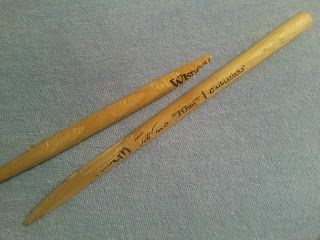 He managed to break it meanwhile the new song Rise of the Wise. Which actually will have a guest singer on the CD coming out 26th February. None other than Joakim from Sabaton! I can't wait for the new album. Heard 2 songs already, and I just love NG's voice and style is just too much to miss it :)

After my short conversation outside the crowd, I squeezed myself back to my place, which the awesome czech people didn't like that much, but oh well... I couldn't care less anymore that time.
As the crew prepared the stage, we've seen the awesome decoration which was so Sabaton-like. The drumset was on a tank for one. The mic-stands were incorporated with war hats. It did look awesome. 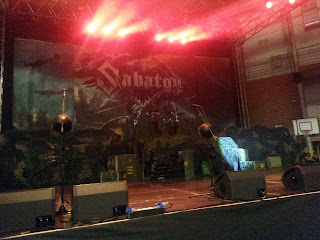 The whole show was extremely professional. It was funny. They seemed to play the jokes naturally (probably planned them before, still was pretty much fun).
For example when the crowd started to chant: Jeszcze jedno piwo (probably it's not written like this in czech, but my best polish knowledge says it will be ok), which means 'one more beer', Joakim just took a whole beer and drank in one go! He was a bit surprised that we demanded that quite early on the show, like after the 3rd song maybe... but still took the challenge. 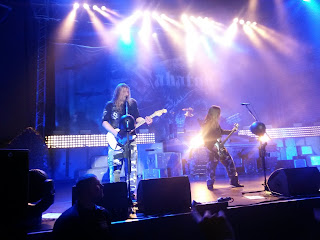 The other joke I really liked when Joakim wanted to take Thors guitar for a song, but he didn't give it to him. He played that he got mad, and went off the stage. The other guys got to a pretended panic, what should they do without a singer... so they've decided to play Gott mit Uns in swedish, so if they screw up the lyrics, nobody will notice. It was a really fun intro for a very good song sang by Thor and Chris. 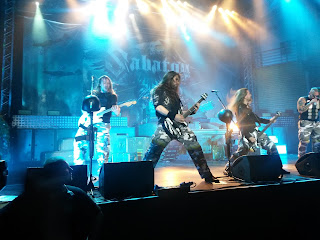 More fun came before the song everyone wanted to hear. Thor started the first notes of Swedish Pagans. The crowd just blew up the hall I have to say I've never heard something like this before. On the stage they started to argue, that Joakim didn't want to play the song, but Thor likes it so much, he acted on his own. Suuuure. Nice act, but I don't think so there ever will be a Sabaton show without Swedish Pagans. 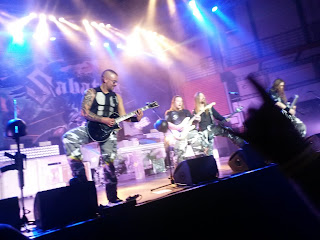 More beers to come and they played a cool set, even tho I left to Wisdom merch and I wasn't present at the last 3 songs. Anyway it was a great show. 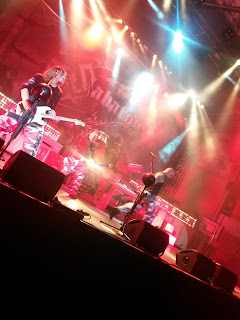 In the middle somewhere (actually since that point) I got beside myself a moron. I was already writing about my surroundings there, but this was way too much for me already. I was standing in the very same position throughout the whole show. And then I just felt someone pushing me badly from the left side. I looked left, nothing. Then I had to look a bit down where I've seen a lady. No, not a girl, a woman around her forties. I'm not a big person myself, but she was small, I didn't need to strengthen myself much, so I just put my legs in a stable position and didn't let myself pushed away. After 2 songs or so I got out of myself. I felt seriously WTF. Then was swearing to her with perfect hungarian as it seemed she doesn't understand an ounce of english (what a surprise). Even though in hungarian you can use some international words for swearing, but we are able to swear for at least 5 minutes without using the same expression twice. I didn't have hard time to send her to hell and she didn't even understand. But it was soooo weird for me. I'm usually a very patient person and especially between metalheads I always felt perfectly awesome. In general they seem to be very open and I've never thought I'll encounter a situation like this. I mean it. If she was asking me to go a bit right, I would have even done it. We all go to concerts to enjoy the show and see the guys on the stage, don't we?
Anyway... new experience, new first feeling, that I wanna hit someone... oh well. I blame the virus :)

After the show I went up to Wisdom merch. Wanted to get the new gold lion girly when I noticed I didn't have enough cash with me.. yeeey for me again. Doesn't matter, I'll order online. Finally I could catch NG up there to make a whole band photo!
Somehow he feels unwell all the time I'm on Wisdom concert. Next time I'll warn you before, so you can prepare :) It was funny to see how these czech people came to the merch and got some stuff. Mostly just gesturing what they wanted. Could talk a bit with Gabor, as he never seem to look nice on my pictures. He shared the secret. Group photos are like that, but if it is only two of us, then it would be diffent. I gave in and let him prove it. Well, decide yourselves ;) 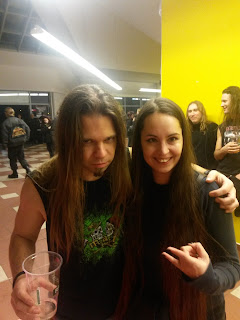 I actually don't understand people who are listening english lyrics be it whatever genre. For me the lyrics part are way more important than the music itself. Probably because I have no musical talent. Still I don't know how could I live without understanding my favourite bands' lyrics. I don't even know how to live without speaking english... seems that's only me.

New feature coming: from now on I'll post a playlist on Spotify with the songs the bands play.
Here it goes for this show: Sabaton - Wisdom playlist

Fortunately I passed my nightbus with 5 minutes, and I didn't want to wait an hour in the cold, so I walked back to my hostel (around 40 minutes). I was so hungry that I went eat some fast food. Surprisingly I bumped into a bunch of guys, who were in front of me in the queue going in the show, and I recognized them. It was my last attempt to socialize. Out of 5 of them only one spoke a bit of broken english. Gave up. Fck I don't understand this...

Let's hope I won't have similar challenges on the summer festivals here. Metalfest Open Air and Masters of Rock.