I'm in love. Unconditionally. I just don't know if Sascha or Dani is the subject. :D
What I've seen on last Tuesday... I miss the words. Those solos were amazing. But let's get back to the beginning of the evening. 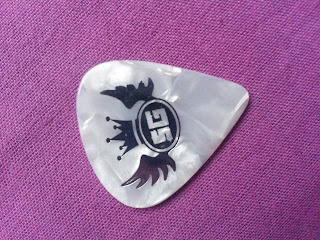 As I noticed at Powerwolf, that one hour before the show many people gathered, I've decided to arrive two hours before so I can be in the very first line. I had my backpack with me, and all 5 degrees outside the club. Beggars came early but I am perfectly able to pretend that I don't speak polish, the magic expression is: "Excuse me?" They just went away, so I could pull myself together as small as possible sitting on my backpack so I wouldn't freeze to death. I succeeded!

Obviously was talking with someone at the entrance, this time it was a guy. We were talking about shows and gigs. So the time passed quite fast. Went in quickly and booked our place at the fence. So this time very first line. Got my beer naturally - as I had a placekeeper there. First band: Crimes Of Passion aka C.O.P. from the UK. Was listening to them previously so I expected a good show. It was more than ok. These guys enjoyed the gig so much. Almost through the whole show they've showed 32teeth smile. Was a very refreshing experience. You just don't see bands having so much fun on the stage. They've played very catchy songs. Even if I didn't know the lyrics, I could sing with them and jump and shout. And I just loved Andrew's (guitar) style, how he played. 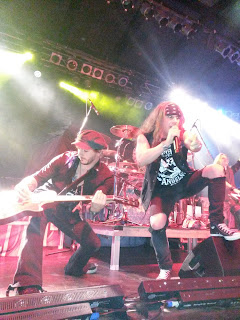 Oh well... the sound was not that perfect, just like on the previous shows. I suspected already that it is because I'm too close. But c'mon something for something, right? (Their sound engineer confirmed it after the show - it sounded good from his place.) It was definitely worth to see these guys so close. Their happiness was contagious. Not that I was not smiling also before, but they definitely added to my mood. Listen to this song, I like it a lot: Love is to die for. If you can, I truly recommend to go on their show. I promise you won't be bored :D (Next one will be the Full Metal Mountain in Austria!) 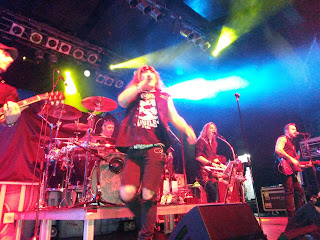 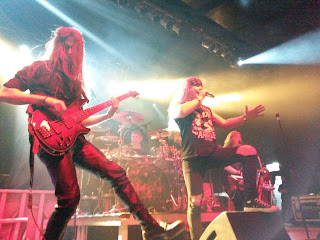 And then myyyy way or no way at all and Rage on the stage. Proving again that you don't necessarily need more than 3 people to put on an excellent show. These guys seemed more crazy than COP guys. The lineup of the band changed recently, Peavy (lead vocal and bass) obviously stayed, but 2 very energetic young man joined the band. Marcos was running up and down on the stage with his guitar. Filled the whole place. I've seen Rage previously last summer (even though only from a distance), and naturally they've played the most popular songs then and now also. I loved how they made us sing with them. Higher than the sky sky sky. And the hall blew up. It was a well made set, seemed to be made to pump up the crowd for Helloween. The funniest part of the show was when the guys from C.O.P came in all wearing a makeshift aluminium foil beard just the same as Peavy has. I can't remember now at which song they came in, but it kinda made my day. 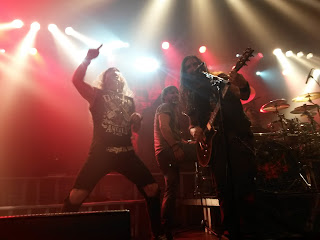 They played almost all my big favourites: My Way, Down, Until I Die. Was a truly great show, can't repeat enough how much I loved to be that close. Here some pics: 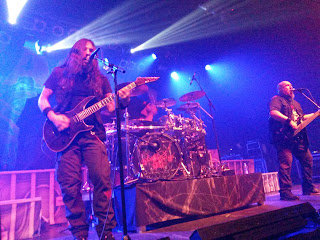 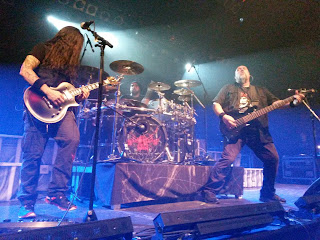 Then there was no way to move out again for a beer, couldn't squeeze myself out, not talking about getting back in to the first row. The crowd started to move closer and closer and with that pressing us together. I felt that fence literally got integrated to my stomach. It doesn't matter, Helloween came out after a short while. It's difficult to find words, seriously. From the first notes until the very last second I was out of myself. Either shouting like a crazy teenager, or freaking out at songs I love, or almost crying or just looking at the stage without blinking and mouth open. And all these one after each other and back and again and again. 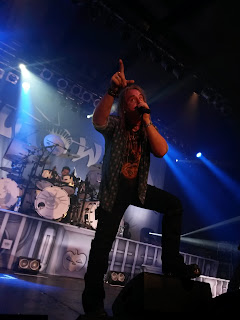 They've started with Eagle Fly Free. Reaallyyyy? Obviously. I sacrificed some of my voice already for Rage, but I still had some left. Goosebumps all over, sound was even better, I could hear Andi perfectly, but even if I didn't, the crowd made sure that the whole place sounded Helloween. Actually people were so close to me, that I heard even when they were breathing, not to mention shouting. Now I can imagine what others could feel when I try to sing hahahahaha. It was not a pleasant experience with those guys beside and behind me. Their voice was even worse than mine, and that IS an achievement. Then one good song came after the other, God Given Right was just brilliant. I can't name a single song throughout the show when people didn't sing with the band. I have hard time in general naming favourite songs, but from the God Given Right album my fav is definitely Heroes (or as it is on the setlist: Hereos :D ). I sang my soul out and then then then I fell in love. I think I can say already, that a good friend of mine, Michael (drummer of Magic Kingdom, and was playing the shows with Iron Mask in the beginning of the year) drew my attention to the drum solo. He said it is great. After Heroes it came. Dani. Yes. Very yes. Oh so very yes! I was just standing there, open mouth and I didn't even see the drumsticks, it was all a blur. It was amazing. Sounded amazing, looked amazing and I was in love already. I didn't want him to stop, I just didn't. 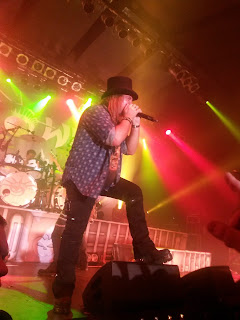 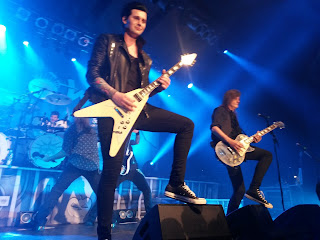 Well, he did. And the show must go on. Or wait, that's an other stuff. Anyway, slower, faster songs, and Andi's sweet confs and then I shouted again, then I cried again for Forever and One. At this point I even put my phone into my bag, I just couldn't use it anymore, my whole being was dragged in. I started to drown in the music. During the second part of the gig I managed to fell in love second time in the evening. I was standing right in front of Sascha. Some of you might already know about my huge musical talent (which I actually don't have), so I don't really understand how these riffs and whatnot are done, but it happened now. I didn't even look at him, but his hands and guitar. I have to say also that I love long haired men. But for some short hair is better. Sascha is definitely that kind. And girls, he is more handsome in live than on pics. And that guitar. Or rather those guitars... He was fun on the stage. Played with the guitar picks, threw out a lot to the crowd, but honestly I didn't care at that point. I did not want to fight for any souvenirs, I was dieing for the show. Before the last song I caught his eyes, and asked for a pick. He was shaking his head and said 'No'. I was like: Hell you give me one anyway. And he actually did, which made me hover 20 cms above ground. The way I got this pick... He looked at me, and showed to the others, that it is mine, and gave it to my hands. I was melting there. I got a smile with it. Unforgettable. 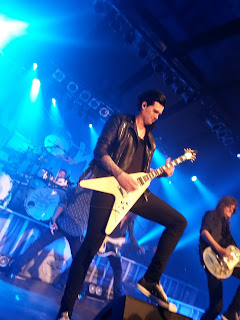 Anyway back to the show. Future World (shout and freak out part - same time of course), then the last song - by that time everyone lost some part of their voices. I had close to nothing left, but seriously what else they could finish the show with than I Want Out. I believe I was dropping some tears (no, it was not that Sascha refused to give me a pick that time). I just love that song. Back and forth. Even love Sonata cover of it. Even love Eufory cover of it. I love to love that song.
(And a bonus song from me, just because it is my alltime fav from Helloween with my alltime fav anime - In The Middle of a Heartbeat - Elfen Lied AMV)

It was an excellent performance, I used the word 'love' a lot today, but I really did love every second of the shows. At the end I almost died. Literally. Dani managed to throw the drum-fell on my head, and the guys behind me almost started to fight for it... was fun to see, but they could've done it farther from me :D

The crowd started to go home slowly, and I finally could have some refreshment at the bar, and planned to fulfill C.O.P guys' request after their show to meet them at the merch, and drink a beer with them. These guys are fantastic! I was laughing so bad when Dale (vocal - a brilliant one) saw my hair, and asked if he can touch it, it was funny as hell. I also managed to make the usual pic with them, and then went to talk with Scott (bass). His devotion to music is breath-taking. How he told me that he prefer jam sessions and play and feel the music was really cool. Then we checked out the green beer what Gretsch got from someone (was playing drums for this night). Then again a huge laugh came when Dale came again to ask if he can touch my hair one more time. :D That face of Henning is priceless! 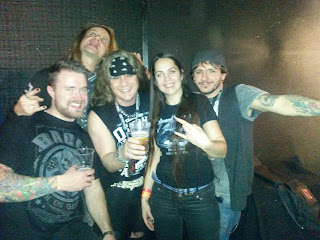 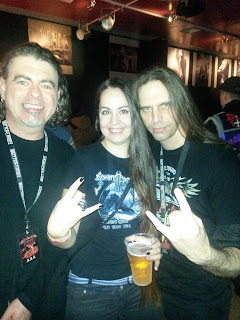 Then unfortunately I had to go *cries* as my bus back home departed at 1:30 and was working next day. Yey. I would wanted to wait for the guys at the bus, but next time that will happen for sure.