Warsaw. 6 hours on a bus to get to the best long weekend of February. Saturday started with Powerwolf and Battle Beast show. I've already been in Progresja Music Zone earlier in last May on a Sonata show, which was canceled due to Tony's serious illness (Freedom Call played headliner set, which was more than awesome). This time when I've read on Facebook that Roel, drummer of Powerwolf had to be taken to the hospital, I felt my heart stopping. It can't be happening again. But the band decided to play anyway. They just used the drum track from an earlier show. It must have been a very difficult decision, but these amazing people wanted to be there for the fans, and they did their best, put a brilliant show on the table. From here I wish Roel a fast recovery!

Aaaanyway I've arrived to the club an hour before the official door opening, so I was there around 17:30 even a bit before. Already a bunch of people there. I've heard someone speaking english. I jumped a bit inside - cool I will be able to communicate. (I am not forced to speak polish, yeeeey - not that I can't,  but english is easier). Turned out that these guys (Tony and Daniel) are following Powerwolf on the whole tour. They were painted their faces also. 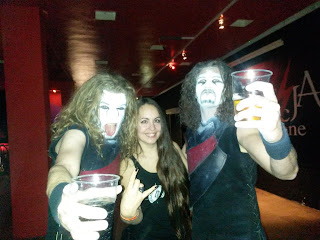 Couldn't talk much in the beginning because the polish PW fan club arranged a meeting with the band, so they went in earlier. Anyway I've seen a girl alone in the queue so started to talk with her. Who likes to stand alone and be quiet for an hour? Well... obviously not me :D So Aga was there and we just talked through the whole waiting time. I had a feeling that we know each other since ages. The time flew really fast and we were already in. Getting our beers and headed to the first line.
We managed to stay there through the whole show. Only 2 girls were in front of us, both of them tiny, so it was a win-win situation. We saw everything also :)

When Battle Beast started to play, we just looked to each other and were like: what the hell is wrong with the sound? I'm not sure if the show sounded like that from everywhere, but from the front it was terrible. Noora's mic was so so low, that if I didn't know the lyrics, I wouldn't be able to understand a single word. Progresja is quite a big venue (I guess it can be full with around 2000 people) and the sound engineer is in the middle of the hall - so maybe 15 meters from the stage. As I said before I've seen shows here before. The sound back then was very good. I'm not sure what happened now, but in my humble opinion was not enough on the mic and a tiny bit too much on Pyry's drums. Oh well. It improved throughout the show.
They played songs from all 3 albums. It was a fun setlist. Played 2 of my favourites: Black Ninja and Out of Control. Naturally the second one is a big big big favourite. The whole crowd went crazy when they started it! I looked around how crazy the people really are, and seen a little girl on daddy's shoulder. She can't be more than 4-5 years old, and was singing with the band! It was the sweetest thing I've seen on a show. 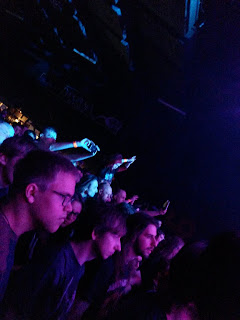 They made so much fun on the stage, all the time the crowd started to clap, Pyry added the rythm and stood up behind his drumset. And it did happen a lot - I loved it! During a smaller keyboard solo Eero literally poured a whole bottle of beer into Janne. And people started to chant "bottoms up" in polish of course but the guys on the stage understood it anyway :) 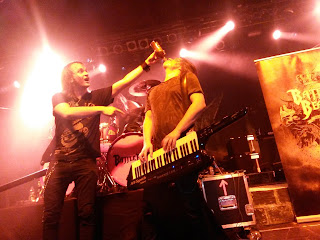 All in all it was a fantastic show. It was a first for me see them live, but I can say I'm convinced to do it again! 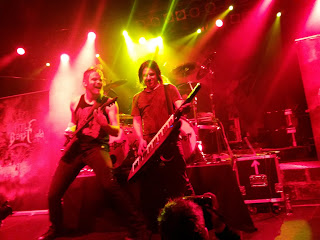 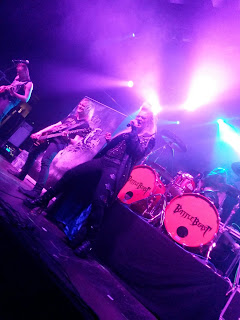 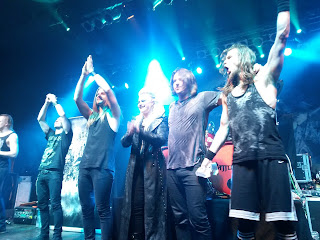 After Battle Beast I squeezed myself out to get an other round of beer while Aga was keeping my place ;) On that short way to the bar I managed to bump into Michał. I knew he will be there. It's quite a funny story how I got to know him. Last year there was a festival in Zgierz, Poland, where Wisdom was playing. I've seen this guy in a Wisdom t-shirt. I jumped up, left my smalec unattended and ran to this guy, was a bit careful and asked him in english if he is hungarian wearing that tee. He looked at me sooooo weird, and answered in polish that he has no idea what I'm asking. After that I declared that he is very not hungarian hahaha. When I was on a show of Wisdom around a week ago in Brno, I posted something about it on Facebook. And he liked it. I was - hmmm, I know this guy. And wrote him a message, so we started to talk. I think it's a funny way to meet people.
Also bumped into Kamil, huge Rhapsody fan, met him obviously on a Rhapsody show. He came back with me to the front with my beers. And at that time Powerwolf was about to start. 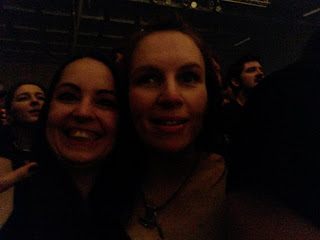 The whole show was truly amazing. Starting with one of the big favourites,  Blessed & Posessed. Going through many albums. This tour was their first time in Poland, so it seemed they wanted to please the fans here. In Warsaw was the third show in Poland but the crowd was so hungry for them, and the band fulfilled their Hunger. At least they did mine. Every song sounded almost perfect. Attila's mic was better than Noora's, I could still do some more on that. Even though here the whole hall sang literally every song with them. The energy in the place was brilliant. Truly fantastic. It peaked when Attila and Falk Maria played with us. I was Attila-team, and I believe we have won against the other side of the audience! Still the best was when they commanded together everyone. I got goosebumps what we could do there, I just love these parts of the shows! 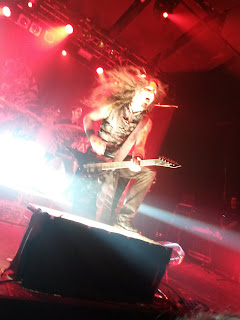 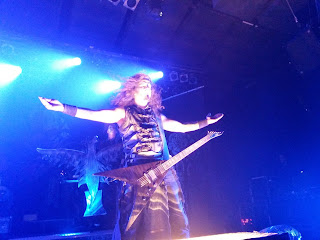 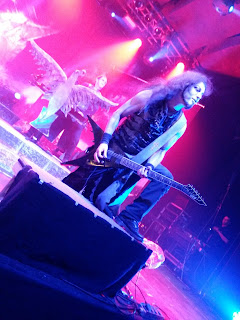 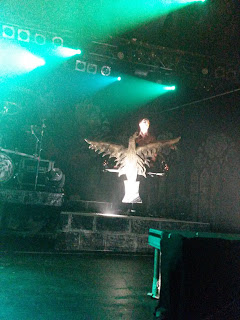 We got Amen & Attack, we got Armata Strigoi, we got We drink your Blood. Was a very very fine set. Before ending the show the usual 'let's light up the stage' act. And then came the alltime fav: Sanctified with Dynamite. I can say I was in some kind of trance shouting with them through the song. It was soooooo brilliantly amazingly terrifyingly perfect, I still can hear the beat and the guitars and see the flames and their faces in my head. 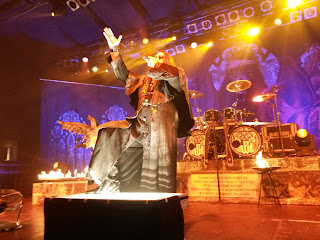 I just can't compare this experience to anything. Which is what I'm aiming for on a show. If a band can reach this in me,  as in having a feeling like I didn't have before - I'll be committed to them forever. After this show I just want to see them again and again.

After the show we went out to the merch in the hope of meeting the guys from both bands. Fortunately Eero and Joona was there from Battle Beast. Could talk some minutes. They said how much they liked the audience that night, which is always a great thing to hear from them. Knowing you did your best, shouted the loudest you could! Joona was joining the band on the shows after Anton left. He did a crazy job on the stage. We were standing right in front of him,  he was great! 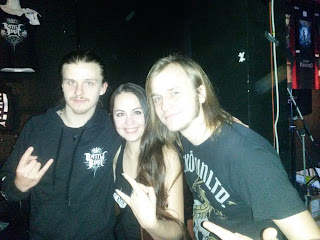 Some seconds later I spotted Falk Maria also. He is such a kind guy. Told us a funny story about a festival where he went out after a show (without the amazing makeup) and a fan was asking him to make photo about him and two painted guys. He did it of course,  and after that the painted guys told to this fan, that he just asked a member of the band to make the shot! I was laughing hard on this story. How much he could've smile inside at that time :) Obviously he was happy to make a photo with us: 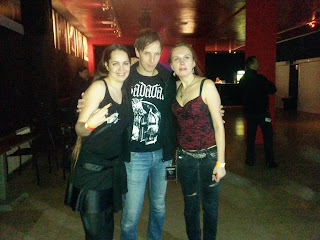 And for my biggest pleasure Attila came out also. Not many of us left there but who did, had an awesome experience! Jenny did some posessed photos where I tried to hide probably succeeded :D

You know guys, hugs worth more than anything else. I'm always asking if I can have a hug. I did ask it from Attila also and he gave me the sweetest answer ever.  He said he can't because his wife is right there. Then I looked at Jenny and said: group hug? They were so cute to accept it,  so I will keep this memory forever! Thanks guys! 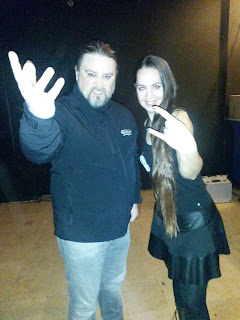 Then they threw us out from the place, but the evening was still not over yet! Went down to the bar and met the Polish Panzer Batallion! These guys are great,  look:

After everyone went home, we've decided to go also. Was not that easy though.

Outside we found some hardcore fans at the band's tourbus. Also Attila and Jenny were there. I have no words for expressing how beautiful couple they are. I am most thankful to have had the opportunity to know them. Beautiful and happy people. I wish you to stay like this forever! ! !
The time has come when they left us to go home and have a well deserved rest. And we have left there with Daniel and Anthony, I told about them in the beginning of the post. They are german guys following the band on their tour. Their determination and love for the band can be an awesome example for all of us! We were talking there in the cold for around half an hour (well actually I was speaking most of the time)... which was a fantastic time. I already love these guys a lot!

But sadly due to the cold and their 19 hours of driving home, we had to part. With Aga we were heading to the night bus, guys drove away. But in my heart this evening is staying forever. Met good people, made awesome new friends and seen a show I will never forget!

Here you can find the setlists of the night (unfortunately 2 songs from Battle Beast is missing as I can't have it on Spotify. Guys told me that it is available on finnish Spotify, not sure why I can't have them with my polish subscription): Powerwolf - Battle Beast playlist