Took me a long time to be able to write this post. It was not a conventional Friday.
The weekend in the beginning of April was not planned, it just came to my way. Friday 1st of April. Could've been a joke, but I've decided to go to a show which I've seen already earlier this year. I've decided to go to meet a friend and to see Frankfurt for myself for some personal reasons. Besides, I've never been at that part of Germany, so many opportunities to catch and bring the best out of this weekend.
So I booked my bus ticket like a week before, faced 12 hours of bus ride to accomplish all the above. I prepared as usual, after work picked my backpack and headed to the bus station. Fell asleep fast, and woke up in the crack of dawn for some snow in the middle of Germany. The bus got stuck in the traffic, was clearly visible we'll be late. A lot. And we were. Almost 5 hours late. That was stolen away from me from the sightseeing, oh well, I'll just have to come back.
I just checked in my hostel, did a short sightseeing in my surroundings (my hostel was in the red-light district), which was not that bad daylight as I thought. Unfortunately I can't say Frankfurt crept beneath my skin. Got my lunch and it was already time to get ready for the show.

I can't deny that I was excited to see again Daniel and Toni, you might remember them. Deep core fans of Powerwolf, following them on almost all steps of the tour. I've decided to get there way earlier than usual, even before the official door opening just to catch up with them. I thought I might be able to see them putting on the make-up. I was extremely curious how men do makeup like that, After 110+ shows it must be easy-cheesy routine work. Prepped myself and took the metro. The signs said that the metro is not going till the end of the line - which was my destination. So I took an alternative, which made me walk like 20 mins. The weather was perfect, sun and breeze all the way to Batschkapp. Fortunately I bumped directly into the guys doing makeup on their car. I have to admit, it was funny to see. But it gave us the opportunity to talk a bit (not only the latenight chat after the last show). As soon as they were ready, we stood in the queue, which already reached almost the gates of the venue, around 100-150 meters far from the entrance. There were some misunderstanding about the opening times, but I've decided earlier anyway, that I didn't want to fight for the first line. My goal this time was to listen the show from the crowd so hearing everything in a way better quality given that I'll not see that much.
In the line I was able to hold Insanus a bit. He is the head of the Powerwolf fan club. Cute fluffy wolf. Gave him back fast to his dad, as you know I'm not a huge fan of cute fluffy things... They've even mentioned that it's rare for a girl/woman to get rid of him so fast. Oh well... Anyway the time passed fast in good company, and finally we were in, could get my beer and was searching for the masks in the crowd. Was not that hard to find them, so I re-joined them for the rest of the night, enjoyed the show around them.

The first band on the stage was Serenity. I had not much time to listen to them previously, but I knew they will have a great show. I wasn't disappointed. They had an awesome appearance on the stage. What I've noticed, that they did miss a woman's voice. Later I got told, that I was right, Nevertheless, they took the audience and there were some serious hadbanging even in the mid-end of the hall, which proves they do have a place and a great future in the metal-scene. Follow me says all.
In between the bands I met 2 friends of Daniel from Sweden, Sara and Michelle. I can say the boring phrase - it was a beginning of a beautiful friendship. Seems we found the same voice right away. We'll see how it goes in a future, I truly hope this was not the last time for us :) 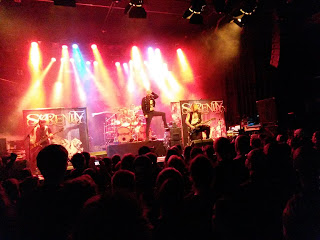 We've spend the time before Battle Beast talking and laughing, and waiting for them to finally come out to the stage. And they did! The energy didn't float from the stage, it has blown up the whole hall. If I had any spiritual sense, I'd say it was even visible. Their set was the same as in February, still a fantastic one. Unfortunately I don't have access to their album 'Steel' on Spotify, so here is the 2 songs they played, but can't put in the playlist: Iron hand and Enter the Metal World (I've chosen to link a live record here with Noora). 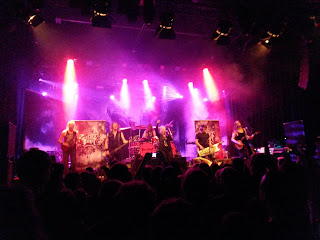 The sound from the middle was clearly better than from the first line, I had such a good time there just for looking at the girls having a lot of fun for the Touch in the night. I laughed a lot! :) "I'm a victim of my own desire" - could be the motto of my whole weekend if I would let it be, but I didn't.
Their show was a perfect performance. I loved how they interacted with the fans and the crowd, made us clap or hey or shout or sing with them. I loved again their joke with the beer what Eero poured down on Janne's throat while he was playing. I laughed at it again and again!
The show was again over too fast, and with Sara we went for some refreshment before Powerwolf.

And by the time we got back to our place, the band almost started. Matthew couldn't play this leg of their tour for doctors' advice, he was replaced for this short time with Markus from Mystic Prophecy. He did an extremely great job on the stage. I'm glad that we also sent a 'get-well' message for Matthew - the guys filmed it from the stage. 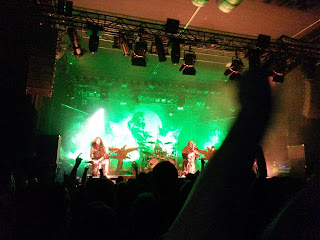 Again nothing new came from the stage in a matter of setlist, but it is a soooo well put together one, that they don't even need to alter it even a bit. The difference was for me, that Roel was actually behind the drums. But somehow Powerwolf seems to be a band which I need to wait to see with all full crew. Hopefully this summer sometime.
But stop dreaming about the future, the show is on the stage and I'm in sort of ecstasy. Can't really explain, but I believe it is about the whole atmosphere: from the stage installation through the people around me till the band and the lights and everything. They do make a unique appearance which perfectly replicates the music they play.


I have to say, that I always like to go to the city/country of a band to see them live. It seems way different. To use their own language, the fans themselves are different. They do appreciate the band like nowhere else. Seems when you play for your own kin, the world falls into its place. Even tho as an 'outsider' I felt home in the crowd. I felt people surrounding me are my friends and I wouldn't want to be anywhere else. I appreciated a lot being close to Daniel and Toni. They were even recognized from the stage. It was their 112th Powerwolf show - such a number, right? Anyway they knew how to enjoy a show, was easy to follow them shouting, was easier than from everywhere else in the audience. We've jumped and shouted and shouted and jumped, and knelt down for Lupus Dei and OoOoOo'd for Armata Strigoi.

Then the fire and the last song left me out of myself, breathless and exhausted. 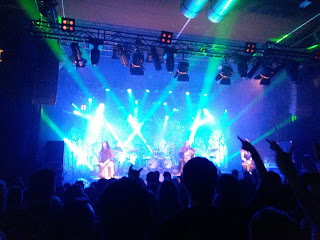 The last very not conventional part for me was the end of the show. I did not go anywhere to make photos or chat with the bands. This concert was not about that really.

Was hoping to be able to chat with Daniel a bit more, but c'mon it was his hometown and he seemed to know everyone. Which is fine, I'd probably have the same here. We left the venue and they departed to the next stage of the tour. BUT we had some fun time with Sara and Michelle, and Madlen joined later on - I was extremely happy to meet them. Young fun and full of energy. Also I was more than lucky that they headed to the centre after the show, so Madlen dropped me out very close to my hostel, for what I'll be always thankful.
I also expanded my knowledge about swedish child songs, which the girls sang so funny, for some we even got the dance moves. :D
As I said before I'm pretty sure we'll meet somewhere again this year.