Oh My Freaking God!
That can be the summary of Saturday night.

I had the privilege to meet Rhapsody in the Backstage! Only a handful of people decided to get VIP tickets, I was surprised why so few, but those guys are truly awesome. I love to watch people in different situations, and after waiting for like 30 mins in the cold outside Alibi in Wrocław, already introduced ourselves to each other, and were extremely excited to meet the band! With some bumps we already could get in the backstage around 5:40. It was so funny how it started. They opened the door of the backstage, the other side the band was waiting, looking who is coming in, and we all just stood, not knowing what to do, who goes first in, but then the ice melted and we started to talk with the guys, making pictures. There was Aga. Aga is the admin of the Official polish Rhapsody page, and fortunately she brought her camera, so better pictures will come later for me. :) Thank you so much for that! 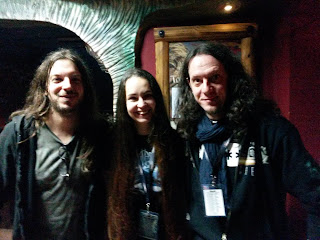 The biggest surprise for me was, when Ale said he remembers me. I was back and forth, already spinning around, trying to hide it nicely, hope I succeeded. I met him first 2 years ago, when his other band, Trick or Treat was supporting Sonata Arctica on their european tour. The funny part was that it's called Meet and Greet, but it's in fact: let's take as many pictures as possible.
As I said I like to observe people, watch their reaction, and here in the backstage it was an extreme experience. Believe me, those shining eyes could support a whole city lightning for the whole night! I do love a lot of band, but this admiration what we had in that backstage was amazing! 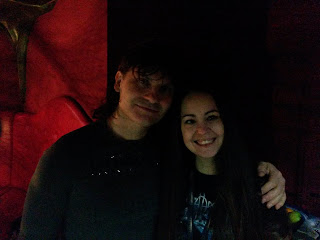 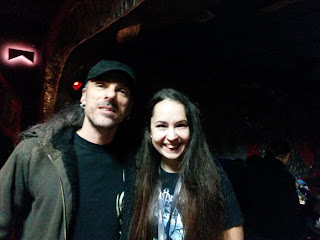 The guys from Rhapsody are very very kind and greeted us with smiles and open arms. We all was intrigued by their welcoming, got our signatures and photos, so the show could begin.
We had like an hour after the meet and greet so we were chatting about our favourites and checked out the merch.
I had a more or less serious conversation with Ercole and Angelo. They were with Iron Mask, met them at their merch. Angelo is producing Iron Mask. Was talking about producing bands, mixing and stuff like that. Could be really nice living in Ternerife and producing music. Sunshine, always warm, and getting nice music on the doorstep! Unfortunately I miss a picture with these guys, somehow we didn't make it, but next time for sure we will!!!

Usually when I'm going to a concert, I'm trying to research the bands. Obviously the headliners are usually my favourite bands, who are inviting bands for their support. The supporter bands are mainly playing the same genre as the headliner, or very similar. I'm into power metal, so the bands are mostly worth to check out. This time I did have time for it, I knew Iron Mask before, I liked them a lot, so it was the concert for two bands now for me, but I checked out Asylum Pyre also. To be entirely honest, they didn't convince me at first sight. There are bands in general who are very convincing by listening to them but on a live show they just can't perform as they recorded it. On the other hand there are bands who are not really convincing on a CD, but when they put on a live show, you'll just feel the tension and the fun they do.

Asylum Pyre falls into the second category for me. They are a french band, female singer. When they got on the stage, and started to play I was shocked. The songs they played sounded completely amazing. It was shining from the stage how much they enjoyed playing. This tour with Rhapsody is their first european tour, and I truly hope not the last one. Heidis voice is going amazingly well with the music they make. They were living with the crowd, which peaked at Unplug my Brain from their new album "Spirited away". That song is awesome, one of my favourites, it did catch me when I was listening to it earlier, and live it's just more awesome. The other song I liked a lot was These trees. Listen listen to them! 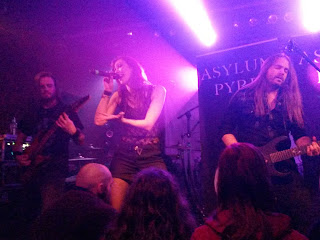 After their show I was going to the merch and had the chance to talk with Heidi, and said how much I liked them. She is an awesome person, with extreme talent. And very shy. I still repeat here: You should accept compliments! They are coming from heart! :) 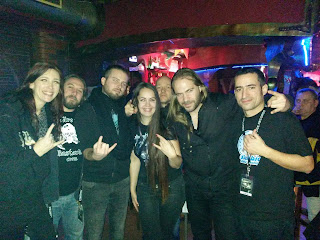 And then Iron Mask took the stage. I knew that Ramy Ali will not be behind the drums this night as they are recording with Freedom Call right now, so I was quite curious about  the first live show with them. The fine englishman from Magic Kingdom, Michael took the sticks and gave the awesome rythm for the show. For my biggest pleasure they've played 2 of my favourites: Like a lion in the Cage and the Holy War. The show was just pure gold. You could live with the whole show from the first second to the last. I just love these guys. The only thing which I usually don't like is, when they ask the crowd to 'hey' and/or clap too often. For me it was a tiny tiny bit too much on this show, but it went well anyway, I shouted a lot and loud! 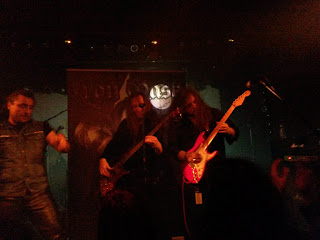 After the show again went for a beer, and then could talk with Michael quite a lot. I always knew that the drummers have different brains, and somehow I get along with drummers quite fine. We were talking about dayjobs and what a musicians do for supporting music, how difficult is for someone who is not a 24/7 musician (in body, because I believe these guys has music in their veins). Anyways it was again a perfect example for me how dedicated these people are!
Then came what we all waited for: Rhapsody!! Last time when I was in Alibi, I noticed, that the sound is really good comparing to small clubs, so I did have huge expectations for a cinematic metal show! I was not disappointed at all, rather the other way around. For me everything sounded perfect. Luca with his extreme guitar play along with Patrice and Dominique. Just wow. Serious wow factor in guitar play. I don't understand music, I feel it, and that night I felt my heart is melting. Alex's drum solo was so much fun and talent there, I was crying inside when he was done with it, I could've listened whole night. He said after the show that he felt like running a marathon this night. I can believe that, he gave in everything. About Ale's singing. Oh. Like, oooh. One of my favourites from the new album is: Rosenkreuz. For me this song just sounded eerie. It was so perfectly performed, that I could just stand there and listen, couldn't even sing with them. I was stunned. They did play of course the big favourites like Emerald Sword or Dawn of Victory. But the biggest plus was what I really felt - the humility which the whole band showed for music and the crowd. Was a truly amazing and unforgettable show. 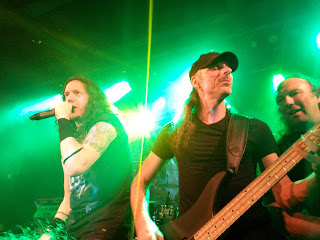 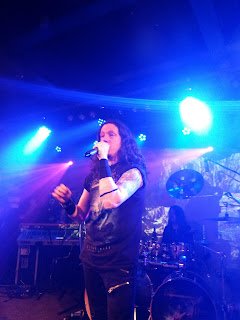 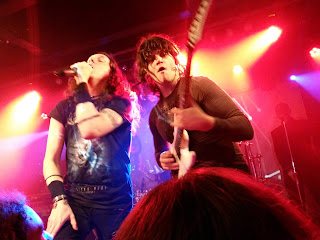 After the show the guys were coming out for a bit, and I had the privilege to talk with Alex, and Ale quite a lot. Turns out that he loves Hungary, even dedicating a song for us on the next Trick or Treat album! I got to know something which I think I can share with you all. He loves Helloween, and he started to learn singing after listening to Keeper of the Seven Keys. I was happy to hear that as it is one of my favourite Helloween songs also. AAAND beside everything I asked him if they can make a Trick or Treat - Vexillum concert happen anytime in the future, and for that I would travel to Italy anytime. And he answered right away: "Why not?". I can't wait it happen :)

I've met amazing people that night. Amazing musicians, and amazing fans. It's always good to meet new people, but it's even better to meet them again. Yapu came from Zakopane for the concert, I've met her previously twice, but got to speak with her only the second time in Zgierz, City of Power festival. She is an extremely talented and nice girl, and I'm sorry we couldn't talk more, but I'm pretty sure this was not the last time we've met. And also there were the guys from the Meet and Greet and some I've met later: Michael (I will listen to your band, and you can expect me on your concert obviously), Kamil (I will be there for you also on Sabaton in 2 weeks), Lynn, Adam, Mateusz, Morten (he came from Norway for Rhapsody, we'll meet again on Masters of Rock!), and Maciej (thanks for the pics you've made).

It was again a beautiful night, my bicycle was waiting for me outside after the show (around 1 am) covered with like 5 cm of snow, but with all the experience and positive energy I got the night, I had no problem cycling home :)

Thank you all for this outstanding evening!