It's an amazingly good feeling when you meet a band, then several months later meet the guys again, and they treat you as an old friend. This happened to me on the weekend. Of course I've rspv'd to the event on Facebook, however they didn't seem to believe I would really come. I'm very happy that I did. 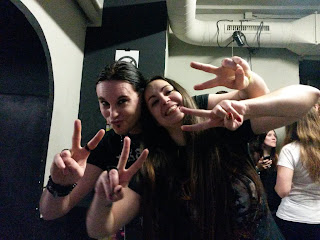 Victorius. They are a german melodic power metal band playing my music and both shows I've already seen from them were completely awesome. First time it was last summer on a festival in Slovakia, this time it was in their hometown in a small club. I traveled 6 hours to get there, it was cold and snowing, but fortunately 2 of my good friends joined me on this trip, so it was a crazy weekend. I can't really remember when I was laughing this much till my stomach hurt.

Anyway after a cold sightseeing we took the longer way back to the hotel, so we could check where I will have to go for the concert. Of course it started to snow heavily. As we passed by the place, I've seen Dirk, but it was snowing bad so I turned back to check if he is that really. Not sure what I expected, that he will remember me or anything, but when I was sure just joined to the girls and went back to the hotel. On the way I explained to my friends who I saw and was thinking by myself: "c'mon Szilvi he surely didn't recognize you. Last time you met you had your long hair lose, makeup and shorts. This time all your hair underneath a hat, no makeup, scarf pulled up covering your nose, and glasses. So all he could see was your glasses." Later on before the show he confirmed that I was right. He just noticed a girl staring at him. But hey! I didn't stare! :D

When there is a show, I ususally arrive half an hour earlier. You know,  just to drink a beer, check the merch, maybe drink an other beer, chat with people, get a nice place in front of the stage and so on. Now this time it was the same. The show was about to start at 8, so I arrived half past 7. The only tiny difference was, that 8 was not the start of the show but the door opening. Yes, it was cold. A lesson for the future: if I go to a show and it's cold, surely check the time correctly. All in all fortunately I could go in a bit earlier, so didn't have to wait that much.

And who I can see right away inside? David. He really seemed surprised to see me, but also happy. I collected my hug and was talking a bit with him. Then got my beer. The cool girl at the bar suggested me some ale, something starting witk 'k'. Maybe. It was a good one really. So yes with my beer went to socialize. Got to know some guy called Chis with 2 drumsticks, so must be a drummer of one of the bands. I couldn't really decide if he just didn't speak english very well or was high, but had hard time to get what he said. Then I met a friend of Flo, Martin. He seemed to be a great guy, somehow I was not warmed up or don't know what got into me, I just wasn't talkative. O.K. Whoever knows me a bit is shaking the head right now that it is not possible,  right? It did happen. After 2 guys I gave up for that time, rather got an other beer. Thought that might help. It kind of did, as I bumped into David again, who showed me the backstage and I got stuck there till their show started.

Backstages are usually really cool. Don't imagine anything special there. It's just a calm place where the bands are chilling. Mostly ;D
This one was not that different also. Even though I've seen cozier places, the room was quite all right. Met some other friends of the band, had very cool conversations about music, traveling, life, and so on. Loved it a lot. Marcel - cool guy, plays guitar, and definitely crazy. Raschi and Diana - lovely couple, friends of Flo, definitely will meet again!
I've asked David if they have any girly in the merch. So I got a Demon Legions tee, which fits perfectly ok, even tho I didn't see it on myself first, so  Dirk had the awesome  idea to make a photo of the three of us, so I can see how it looks on me. Here is the first try: 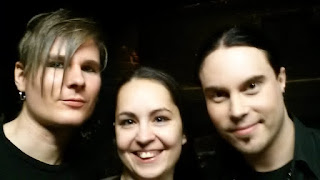 So the whole purpose of the pic went down, as the shirt is totally visible, right? Perfectly made photo by Dirk, as he had the longest arm. :P But afterall we did the correct one also, so I already didn't want to take that shirt off. 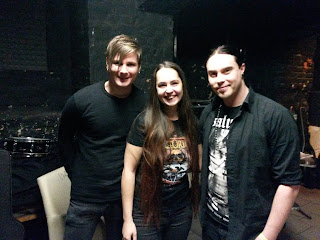 The evening just went on, when Frank arrived with döner. I got asked if I know what döner is. Like, seriously? Do I look like coming from outer space? I'm weird, I know, but not extraterrestrial weird! Ofc I know what is that! Then Flo and Alex arrived, and got my hugs from them (because hugs are just way too good to miss them). Was very good to see them again.
I thought I will just visit the bathroom and then get an other beer before the show. I had a really really nice conversation with Theresa there, I'm quite sure we will continue that topic ;)

Anyway. Ran to the stage, first line obviously, and shouted my voice out on the show. It was over just way too fast, but Metalheart obviously there at the end, I've heard everyone shouting it from the crowd, and these times I definitely got goosebumps because it is like all the energy in the room concentrates in a place and fills everything. Just fascinating. 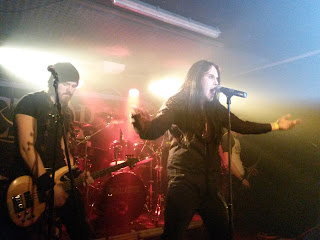 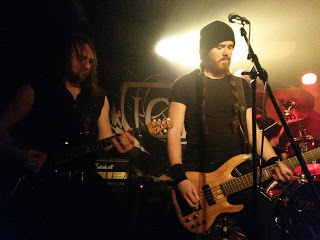 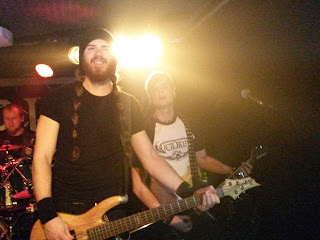 Obviously I missed one of my favourite songs - Day of Reckoning. BUT! I got a deal with the guys, already shook hands on it with David, Flo and Dirk, that they will play it next time I'm going to a concert. That is a promise, which I'm planning to make them fulfill this year, so if you also wanna hear that song live, check out their shows/events, and if I'll be there, the song will be there too ;)

After the show obviously time for some pictures, chit-chats. I got some funny pics also, here they are. 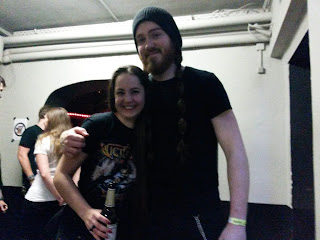 And just finishing the night I got a poster of 'The Awakening' album, and even got it signed! And actually a normal signature is quite lame, so I asked them to draw something for me too, which they did! I got a kind-of-metalheart from David, a FE<3 from Flo, a skull from Alex, a flower from Dirk, and even got a full drumset from Frank! YEY. Well, almost yey. As I was running up and down with the poster and a marker, some guys from the other bands wanted to sign it also. I was like, aaaaallright. One of the guys was a real a.hole. Like a true one. Really drawing a dick on a poster of an other band? Like seriously?
Well, if any of you can show me a way to add something to it and make it look like something else, then please share! 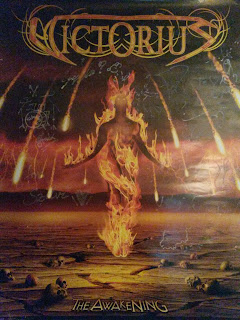 Have a beautiful rocking year to all of you, mine started amazingly! Thank you so much, guys! Definitely see you soon ;)